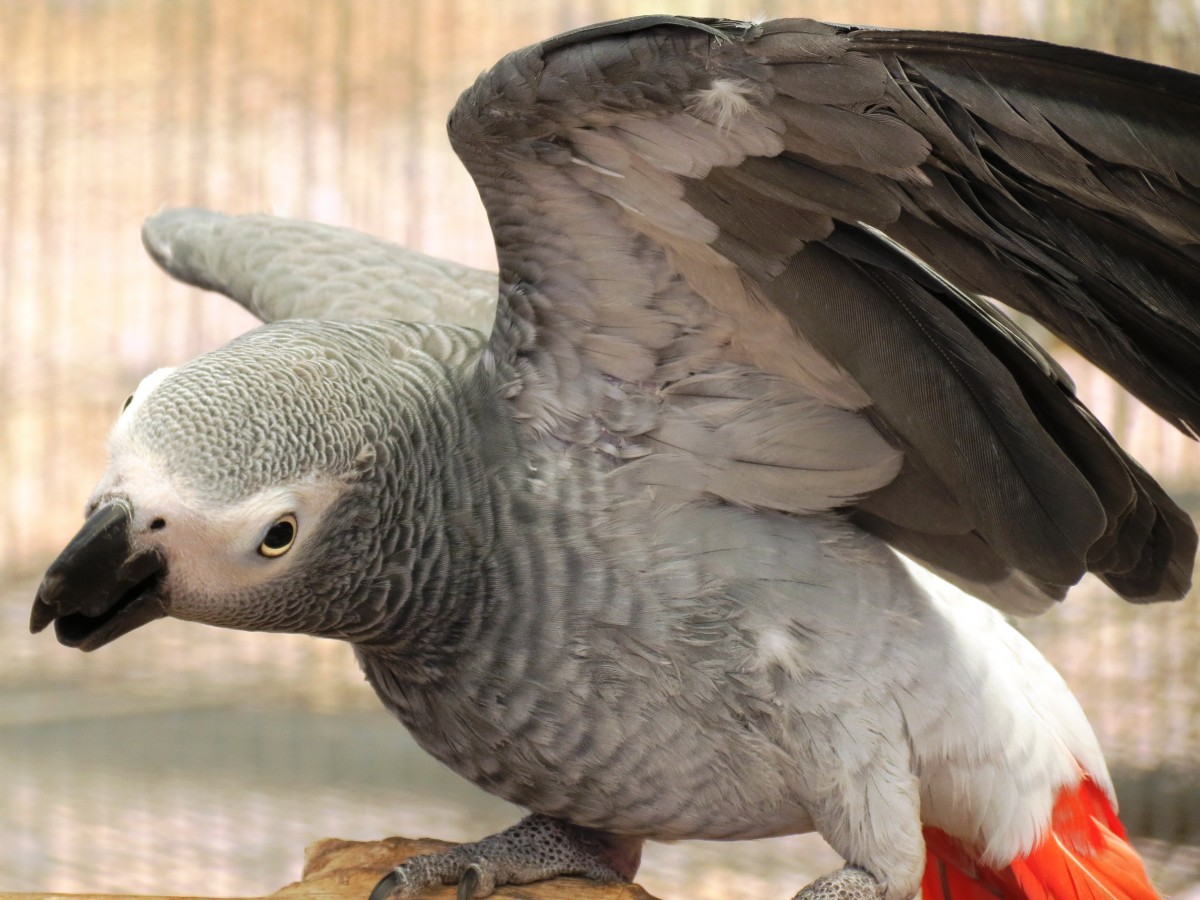 Recently I took my camera to The Oasis to take pictures of the birds at the sanctuary. Some of these birds I have known since before the inception of The Oasis Sanctuary. Many others have arrived in the past few years and I am continuing to get to know them. This is the story of one such bird I recently met….a little bird who has not had the easiest start to life.

I was visiting one of the “original” birds in the African Grey mini-flight, when I noticed a cage sitting in the middle of the flight. A very cute and curious little Congo Grey began making overtures of friendship toward me. I asked Staff who this might be and was told her name is Boodah Bird. 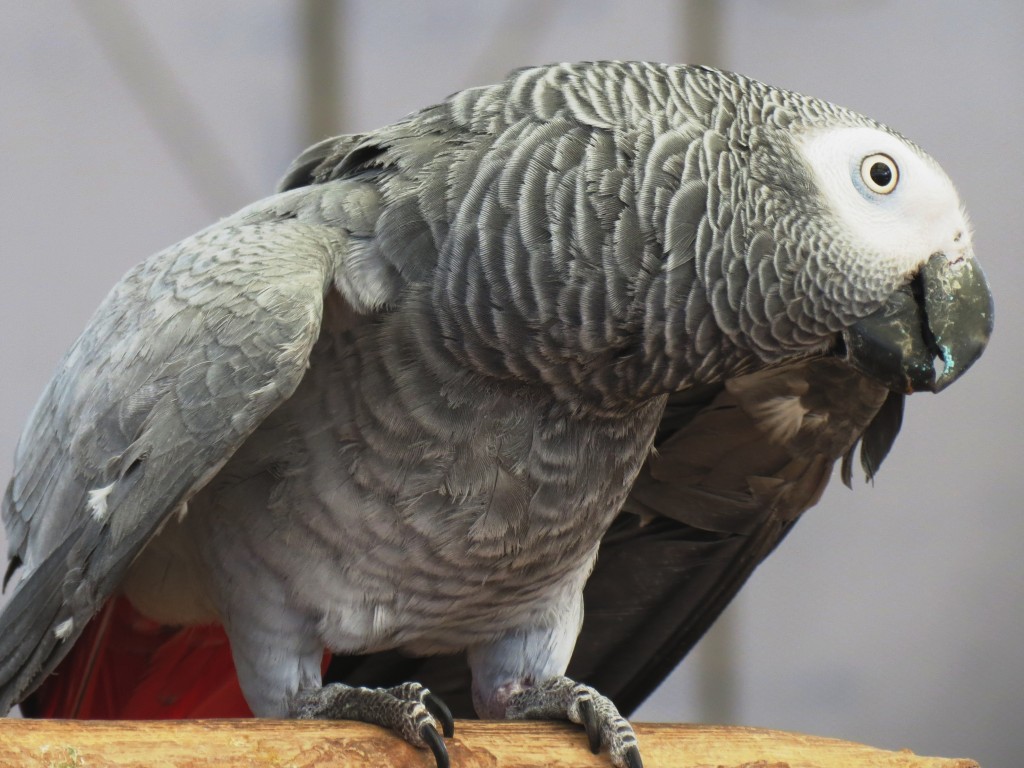 Now age 19, Boodah was born at the end of 1994 with a spinal abnormality assumed to have been caused by improper placement and rotation of the egg before hatching. At first she could not even hold her head up. Her loving caregiver, Mary Beisser brought her to an avian Vet and did her best to insure the best possible outcome for the little bird. So Boodah wore a specially constructed neck brace for several years. This situation and the efforts made to help her were so unusual that Boodah had an article with pictures of her in her brace in the June 1996 issue of the now-defunct Bird Talk Magazine.

In addition to the spinal problems, Boodah also has a misaligned beak that may have been caused by syringe feeding of the handicapped bird. This requires ongoing beak-trims, as her beak is not “naturally” ground down while eating and playing. Since she is handicapped, she also cannot bring her toes to her nose to clean her nostrils like a “normal” parrot would do, so Oasis Staff regularly have to clean her nares. 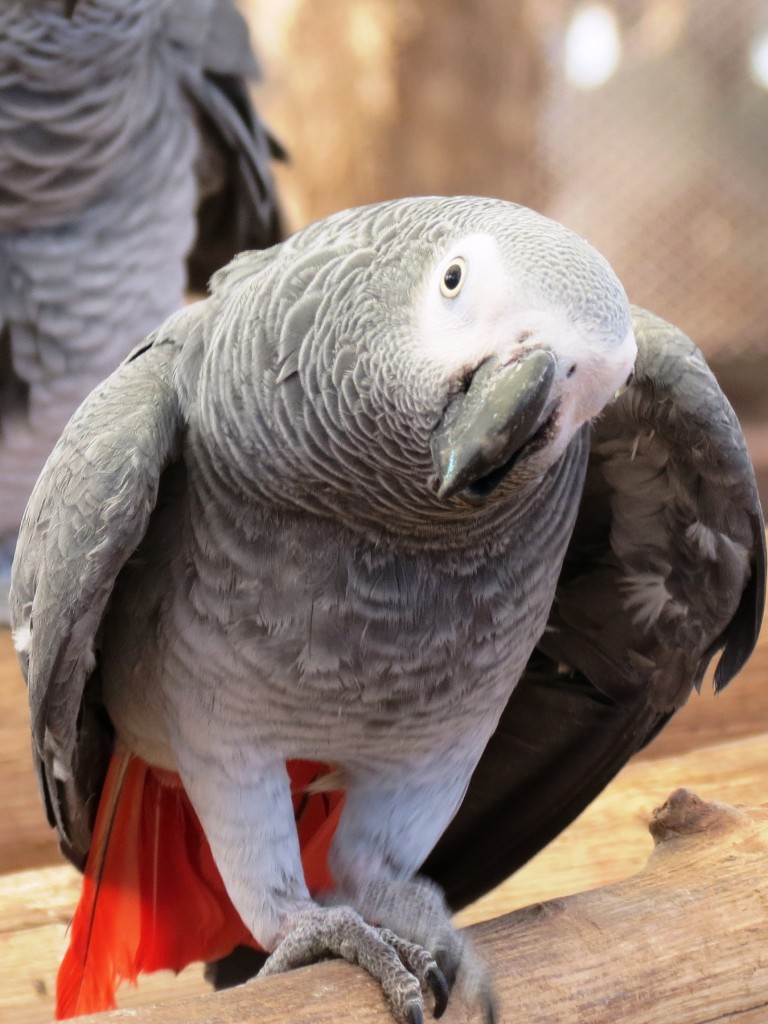 At some point in her life, due to balance problems caused by her spine, Boodah fell and injured her eye, causing fluid buildup and loss of some, if not all, of the vision in her left eye.

Boodah’s original caregiver, sadly, passed away in October 2005 when the little bird was 11 years old. Mary’s passing left behind 32 birds, mostly handicapped, who Mary had loved and nurtured. With the help of the Mesa Fire Department and volunteers from a local bird store, Cage World in Mesa, the birds found safety and new homes.

Boodah went to the home of a loving couple, the McGraw’s, where she lived for nine years. She bonded strongly with the husband. When away from him, she would scream and cry for hours on end. Although human-bonded, The Oasis agreed to take this handicapped little bird and see whether Boodah might do better in a small flock. Although she can fly somewhat, due to the eye injury and her spinal problems she has a hard time landing. She prefers to remain in the safety of her open cage in the flight she shares with five other Greys who are all friendly toward Boodah. When staff and visitors come, Boodah becomes excited to see people, but can become “nippy” so people exercise caution if handling her.

The McGraw’s still love and care for Boodah’s well-being. They come to visit her regularly and have helped support her care. But they and all of us here are pleased that Boodah is finding friends in her flock and settling into life at The Oasis.

A Tribute to my Handsome Prince

By Ruth Ann LaRue Have you ever had that more-than-special companion animal? Perhaps you have.…

By Sybil Erden, Founder – October 2014 Archie and Edith came to us, shipped in…