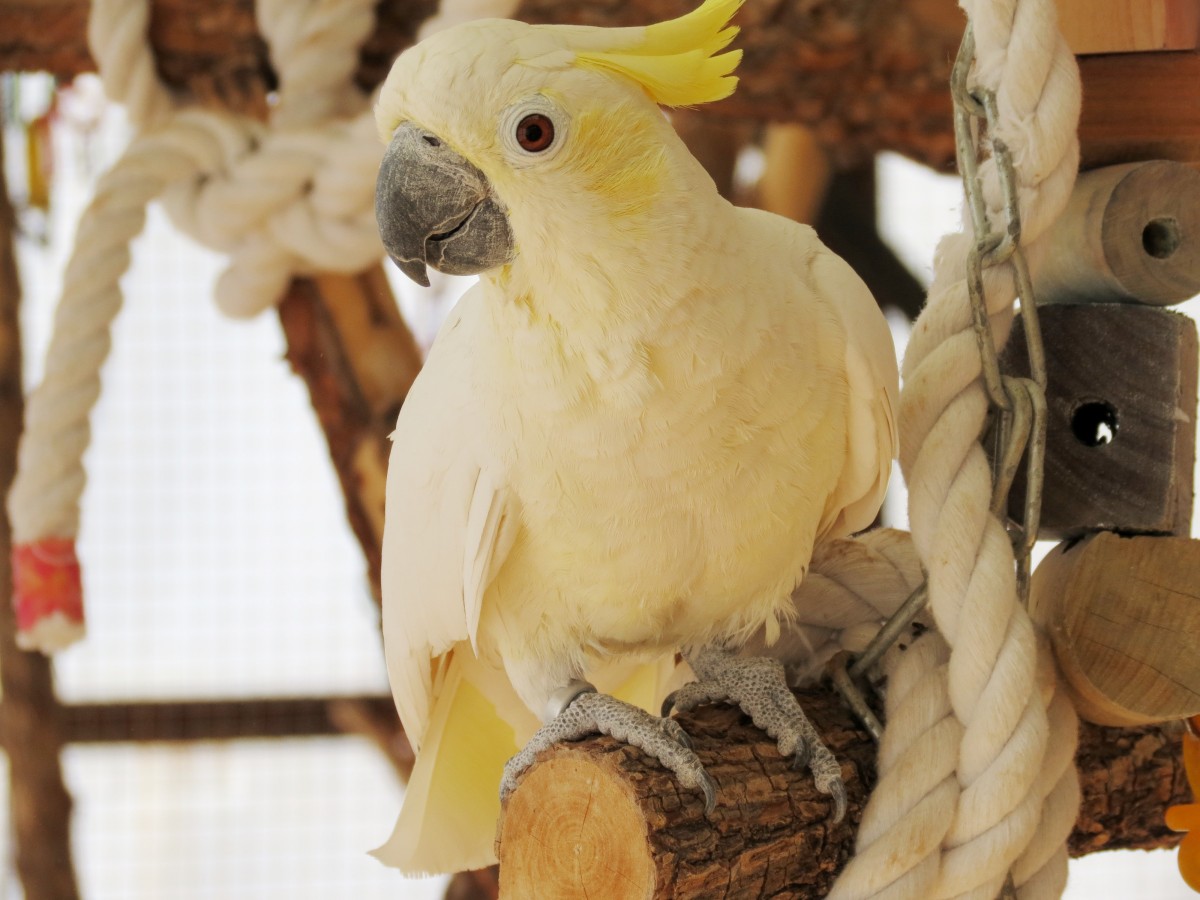 By Michael Marion, Friend of The Oasis – July 2015

My dear wife Linda was told that she had Stage IV lung cancer in June of 2010. Despite the devastating news we were determined to fight. Linda loved all kinds of animals – dogs, cats, small birds and then we acquired Sunny, our Lesser Sulphur-crested Cockatoo. We got her as a chick and this bird became the love of Linda’s life.

Sunny had every toy imaginable, the best cage swings, and all kinds of chewable items including balsa wood, which Sunny enjoyed destroying as soon as it got into the cage! During the day she was with Linda in the house or sitting watching TV where she enjoyed going into Linda’s shirt and nuzzling. And Sunny learned a couple of words…Sunny, Honey. Linda also thought she had other vocabulary but I was not so sure…probably just wishful thinking when she would hear different sounds. 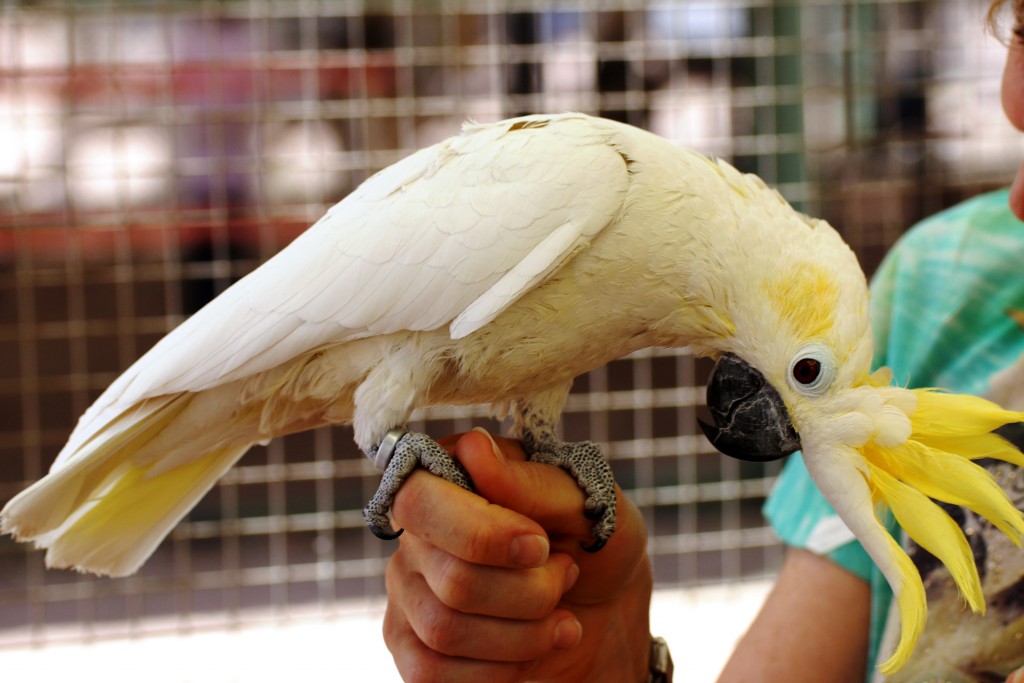 During Linda’s illness, we discussed the fact that if the worse should happen that the family could not care for Sunny for a variety of reasons. It was Linda’s fear that Sunny might actually wind up in a bar somewhere learning cuss words from drunken sailors! So, Linda called The Oasis and asked if Sunny could be taken in. Unfortunately, at the time, there were just too many birds and Sunny could not go. Other places just did not feel right to Linda. So she asked me, out of deep love and concern in her heart for Sunny, if I would euthanize her. I totally understood and, while it would be very difficult, I said I would do it for her.

These were difficult times – chemo treatment; radiation and continued decline. In the middle of November 2010, exactly 5 months after her diagnosis, my dear wife passed away. Poor Sunny didn’t know why her dear friend was no longer there. Sunny was about 11 when Linda passed.

After several weeks it was time to focus on Sunny and Linda’s request. What a terrible situation faced me. Yet I knew that it was my dying wife’s request out of love for Sunny. Knowing that her first thought was to have Sunny go to The Oasis for the rest of her life, I decided to call again to inform them of the decision that had to be made. There was now a place available for Sunny and without hesitation they said please bring Sunny to us! Well you cannot imagine my joy in hearing that news and I know that Linda would have been so happy!

It was just after Christmas, December 30, 2010…Sunny flying first class with me in her little box from New Jersey to Arizona. Arriving late in Tucson, we decided to stay overnight before making the long drive to The Oasis.

That evening a terrible storm developed. If it wasn’t a hurricane, it was close to it. The next morning it was even worse. The sky was totally black, it was cold and the rain was being blown sideways by the most powerful wind. I felt more than a little trepidation as I got onto the highway and headed east to Benson. Driving slowly, trucks were speeding by, rain blowing in torrents flooding the roadway. And poor little Sunny in her cage on the seat next to me, totally frightened, asking “Sunny? Honey?” – What is happening? Where are we going? I could hear the fear in her voice.

As I drove, I started having second thoughts – driving my bird (my wife’s best pal) into this oblivion? And she is scared to death. So, with the sky totally black, I said a prayer to my dear wife that I knew she could NOT respond to.

I asked Linda, out loud – “Honey if you want me to continue to bring Sunny to The Oasis, make these black clouds open up and show your approval by letting the sun shine through!” What a ridiculous request! I knew it was not possible but it would give me support to turn around and bring Sunny home.

I kept driving for 10 minutes whereupon, to my great shock, a hole opened up in this totally black sky just overhead and the sun shone through! This was not a sliver of light nor a streak. It was a big round, widening hole amidst the blackness surrounding! I could not believe my eyes. And then, to add to the miraculous occurrence, a double rainbow appeared pointing off in the direction of The Oasis!!

Can you imagine how relieved and comforted I felt…Linda’s love for me and Sunny caused something spectacular to happen! So, I continued to The Oasis and when we arrived, I looked up again and the sky was totally black!  The hole that had stayed open for most of the remainder of the journey to The Oasis had closed! Total blackness again! As we were welcomed by Janet and the staff, I felt comfortable that Linda was totally in support of the decision I had made for our dear Sunny. 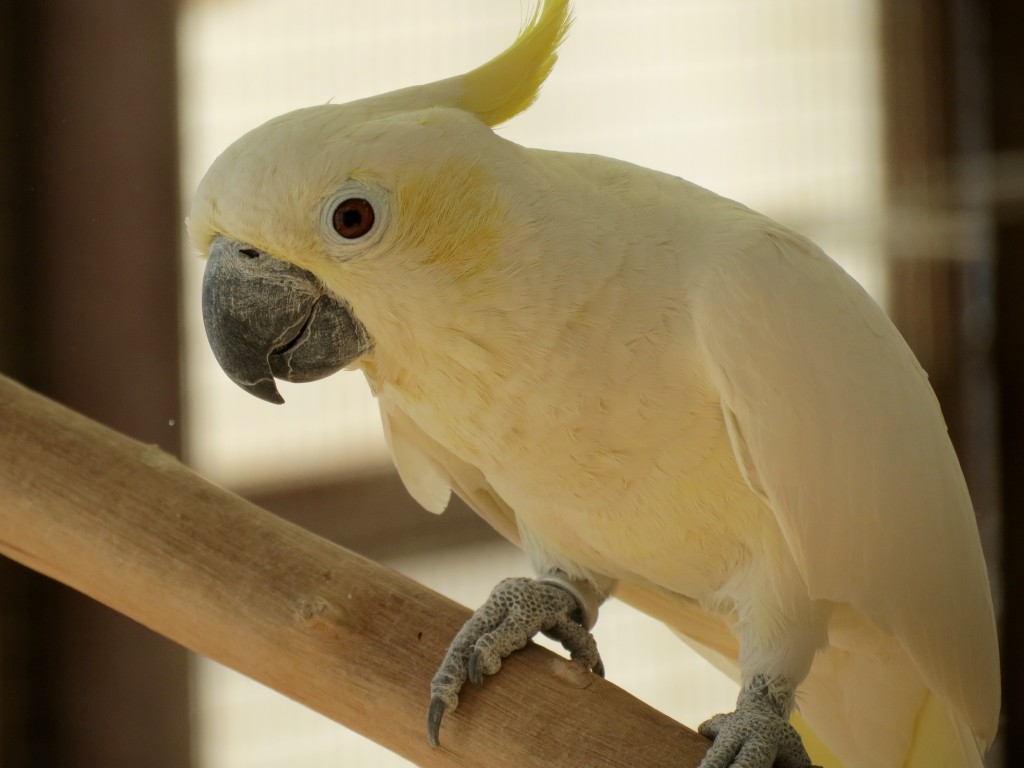 Sunny has been at The Oasis now for just over 4 years and has many human and avian friends and the best of care. There is no question she is better off at The Oasis where she can fly in the Female Cockatoo Aviary and interact with her own kind. If you have visited this aviary you have probably met our precious Sunny-that zippy little flyer that lands on your shoulder and says “Sunny, Honey” in your ear. No more fear in her words, just playfulness and happiness.

Now, the rational side of me says this must have been a natural occurrence. But, I still cannot dismiss the spiritual nature of this event showing the way and giving me the confidence to continue to the end of the rainbow…where there would be a wonderful life for our little bird, Sunny!