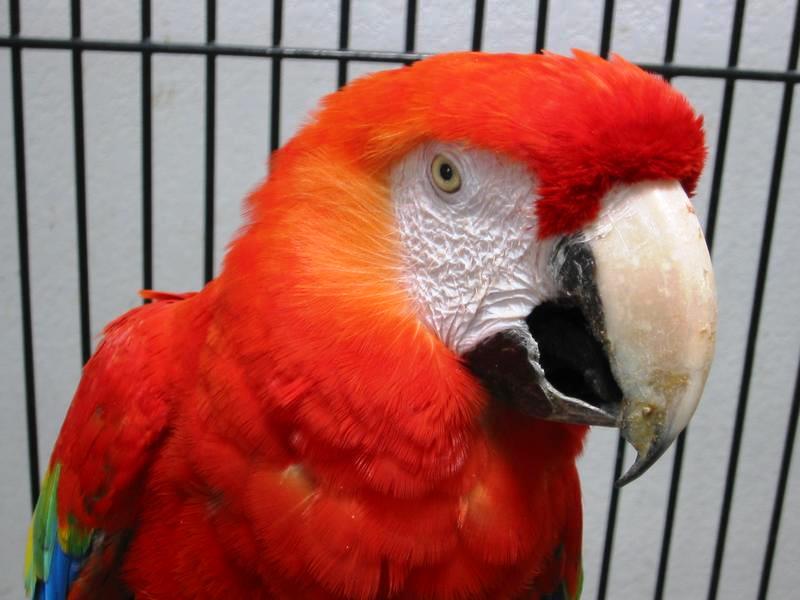 Phillipe was one of the first Macaws to come to my home in 1997, in the days before The Oasis became a non-profit. We had already applied for incorporation and non-profit status, but things were far from complete. Rainbow, my very first Macaw (a young Scarlet) was already living with me, but as a captive bred bird, he was and would remain very different from older wild-caught and retired breeding birds…

I had made a friend with a man on an Internet chat list who worked for a huge breeding operation in Florida. On a trip to Ft. Lauderdale to visit family, I took a day to visit their facility. I learned a lot about the care of large numbers of birds (they had 1000 breeding pairs!) and have utilized much of what I learned to create some of our operating procedures for large scale feeding etc…but I digress…

Shortly after my visit I received a call from my friend telling me that his boss had two pairs of Macaws that were unproductive…and that he normally “euthanized” non-productive birds. These birds had a special place in his heart as they were his very first two pairs of birds. One pair were Blue and Gold Macaws, the other were Scarlets – Phillipe and Priscilla, his mate of over 20 years.

I was enthusiastic about taking these four birds in and before they arrived, I had two large cages, 6×20 feet built…the same size they were accustomed to. A couple of weeks later the cages arrived. A few days after that I went to the Phoenix airport to pick up the birds.

Phillipe and Priscilla were special from the very start. All four were older wild-caught birds, birds forced to “triple clutch” eggs for over 20 years. And while both pair were obviously dedicated to their mates, Phillipe was extraordinarily protective of his much beloved mate, Priscilla. He would  spread his large wings around her every time anyone approached their domicile. Priscilla, I had learned, was about 10-20 years older than Phillipe. She was wracked by severe arthritis so we installed flat perches for her, something The Oasis still does for birds with foot problems. She also had obvious cataracts. Priscilla also could no longer eat holding food in her foot, so Phillipe would not eat that way either, and they ate like budgies or pigeons. Furthermore, since she could not crack nutshells, neither would Phillipe. He understood her limitations, but loved her with fierce devotion. I immediately felt that we humans had a lot to learn about love, marriage and monogamy from this pair….

By 2000 the Sanctuary had found land here in southern Arizona and was ready to move from Phoenix. The moving of over 200 birds went well with no loss, but the first winter here was difficult. We had no volunteers, only two of us on-site to care for the birds (plus a part-time gentleman with health limitations.) Since we had no way to factor in the climate and environmental differences, we did not realize how stressful this was on the aging Priscilla. In early February 2001 we found Priscilla dead in her cage. Phillipe was inconsolable. I will never forget how he screamed when we showed him her body before burying her…..

We soon brought him indoors, into the “bird barn” and placed him in a large cage next to a number of other Macaws. We chose to leave the door to his cage open. For the first few days Phillipe did not eat, but on the third day he began pecking at his food. He had never been indoors except during his quarantine 20 or so years earlier…an experience which could not have been positive for this or any bird. Phillipe stayed in the cage, with door open 24/7, for about a week or two, then began to venture out, sitting on the top of his cage. It took him a couple of months to begin moving around the tops of other cages and during that time, he finally became friendly with some of our other “bachelor” Macaws. Phillipe adjusted to life indoors.

After a few years another female Scarlet Macaw, Fannie, came to live at The Oasis. It actually took a couple of years, but Phillipe began courting the younger girl. Eventually they began a long term but very contentious relationship. It became very apparent that his 2nd marriage was not the love-match he had with Priscilla….but he had a friend. For me, that was all important. 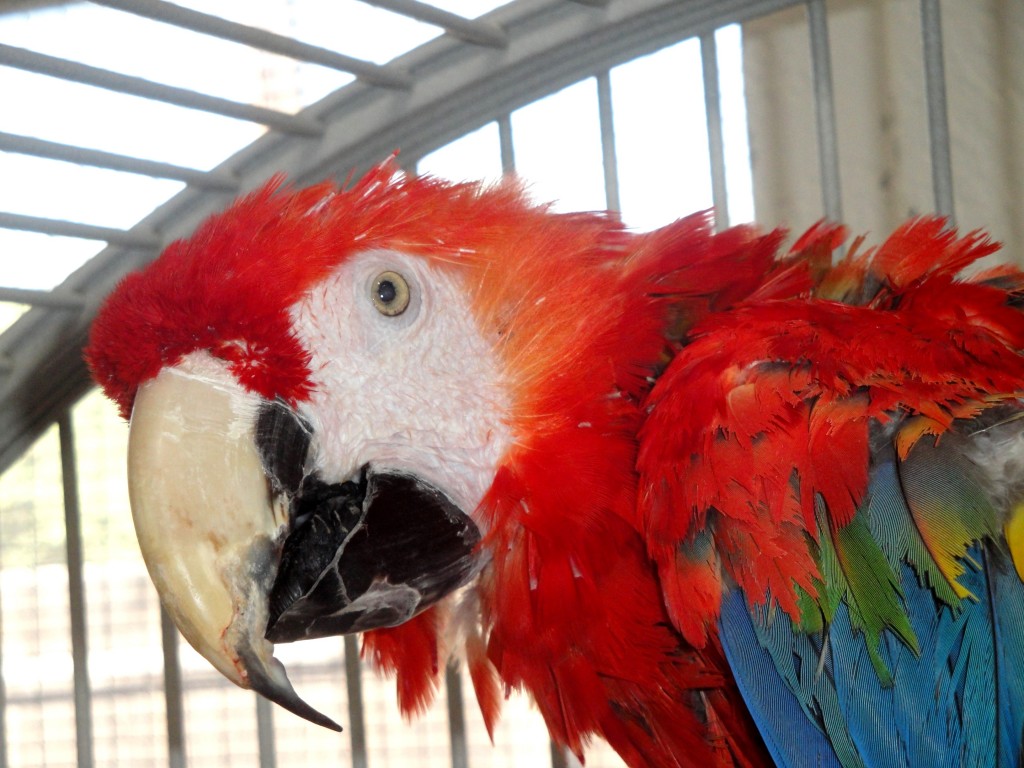 Fannie was full of spunk and her outgoing personality brought Phillipe out of his shell. Most times he enjoyed Fannie’s attention and fun personality but she would occasionally become very bossy with him. Even though the pair would often bicker, they always seemed to find a way to settle their differences. Because of the nature of their relationship we kept each in separate cages, side by side, and allowed them to be out together during the day. Phillipe seemed to appreciate the nighttime break and time alone.

As time passed the bond between Phillipe and Fannie grew. It became apparent that they wanted to spend more time together. We allowed them to share a cage and they did very well… for a while. Then the bickering would flare up and we’d find ourselves setting up another cage to give them time apart. This cycle occurred regularly over a few years and we accommodated their needs because we knew that they were true friends. I believe that Phillipe and Fannie were each looking for something different in their relationship, both at different stages in their life, and through it all their friendship held on.

Late in 2010 Phillipe began to show signs of aging. He was becoming arthritic, developing cataracts and was in the beginning stages of kidney disease. We decided from this point that we would allow him his own cage space where he would have a place to rest. During this time Fannie remained true to him.

Fannie was now about 21 years old. She had always plucked her body and barbered her wing and tail feathers, but otherwise was healthy, active and a typical Scarlet Macaw. On March 10, 2011 Fannie and Phillipe spent the day hanging out together on the Macaw play stand. In the evening they were put to bed in their appropriate cages and ‘night nights’ were said. We had no idea of what was ahead.

During the morning checks on March 11th Fannie was found dead in her cage. Phillipe was perched in his cage just adjacent. He had lost another dear friend. This time he gave no response when we offered him the opportunity to see her. There was only sadness.

Phillipe did not grieve for Fannie as he did for Priscilla. He seemed content being a single bird. He was a little more interested in his caregivers and even allowed Zoe, a Blue and Gold Macaw, to hang out with him on his cage. Now in his very late sixties, Phillipe was happy hanging on top of his cage and watching the antics of the much younger birds. We continued to monitor his health and other than continued loss of eyesight he seemed to be stable with the regimen of medications we were administering.

Just before Thanksgiving we found Phillipe in distress. He was bleeding heavily from the vent. I made immediate plans to have him seen by our veterinarian, Dr. Driggers, and he found that Phillipe had developed Papillomas, which were treated, and also that his kidney disease had advanced.

During his intensive recovery Phillipe remained with Tom and Ruth Ann LaRue in our Foster Care home. He enjoyed the one-on-one attention and his condition stabilized for a short time.

On January 19, 2012 Phillipe was in critical condition. Dr. Driggers confirmed that his kidneys were failing. Ruth Ann comforted Phillipe, hand feeding him to keep his strength up and holding him through the night. The staff waited anxiously for news, hoping that Phillipe would be able to recover one more time. Sadly, the next morning we received this news from Ruth Ann…

Dear Phillipe left for the Rainbow Bridge. His life force just passed away quietly. He was standing on his perch at 7 a.m. and then leaning on the perch at 7:25. I held him for 30 minutes. In the last moments something told me to go outside, so Phillipe and I went out. I held him up so the sun was full in his face. I told him that Priscilla was waiting for him. He felt the sun’s warmth on his face and body and he heard birds calling as his heartbeat stilled and his final breath exhaled. I held him close as his spirit winged its way to the Bridge. All was peaceful. No struggle, no sound, just a quiet resignation to the next life.

Peace be with you, Phillipe.