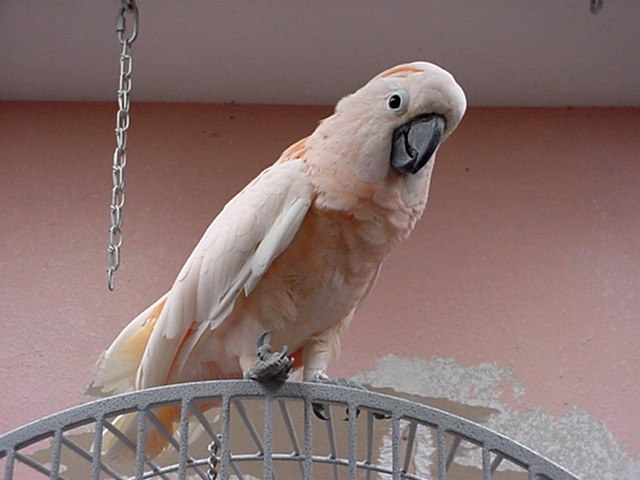 Sassy and I fell in love the first time we met. She was five months old and had just undergone major orthopedic surgery to correct her legs, which at birth were rotated with her feet pointing up to the sky. Recently out of bootie-type bandaging, the large pink baby, a Moluccan Cockatoo, was learning to walk. But Sassy preferred to be held. Cuddling her and looking into her huge, dark, liquid eyes, I was hooked…’, ‘
I was looking for a cockatiel- friend for my (now ex-) mother-in-law’s cockatiel, Petey-bird, who had recently come to live with me. I went through the Phoenix Sunday paper’s “pet column” and found Margaret Anne who had advertised young birds for sale.

After selecting a cute little cockatiel, Margaret Anne asked whether I would like to see one of her other baby birds. She carried out Sassy.

As Margaret Anne told me the story of Sassy’s legs, I realized that the same surgeon had recently done orthopedic surgery on one of my birds. In passing he had told me about the work he had done on Sassy. Small world!

I spent the next half hour in this stranger’s home playing with and cuddling the delightful bird.

I was unable to get Sassy out of my mind and heart. I knew that (in 1996) Moluccan Cockatoos, even those purchased directly from breeders, cost at least $2000. This was far out of my reach.

After few days I called Margaret Anne on the pretext of letting her know how well the two cockatiels were getting along…but in reality to ask whether I could drive over and play with Sassy again.

After spending another hour playing with Sassy, I asked Margaret Anne whether Sassy was for sale and how much she wanted for her.

Margaret Anne said Sassy was not for sale…but she had been looking for the “right home.” She said it was obvious that Sassy and I were meant for one another. Sassy normally would hide from strangers, but she and I were inseparable. We entered into an agreement that if I ever could not care for Sassy, Margaret Anne would get her back. I agreed immediately.

Within two weeks, Sassy came to live with me…and Margaret Anne and I became good friends.

I worried about who would care for the other birds like Sassy…the ones with handicaps or problems needing special care. When Margaret Anne and I got together I would tell her about me dream for a place where birds like Sassy would be safe. Over lunch, the dream for The Oasis took shape and slowly became a reality….

Sassy is almost 12 years old. Appropriately named, she is curious, willful and full of spunk. Due to her foot abnormalities, she was the first of my birds allowed to fly. (All Oasis birds are fully flighted now.) Sassy is further proof that animals do not accept their “handicaps” as defeat. Even after surgery, Sassy’s feet and legs are not “normal.” She walks on the tops of her feet. But she runs, flies, plays and does everything that her able-footed peers do. 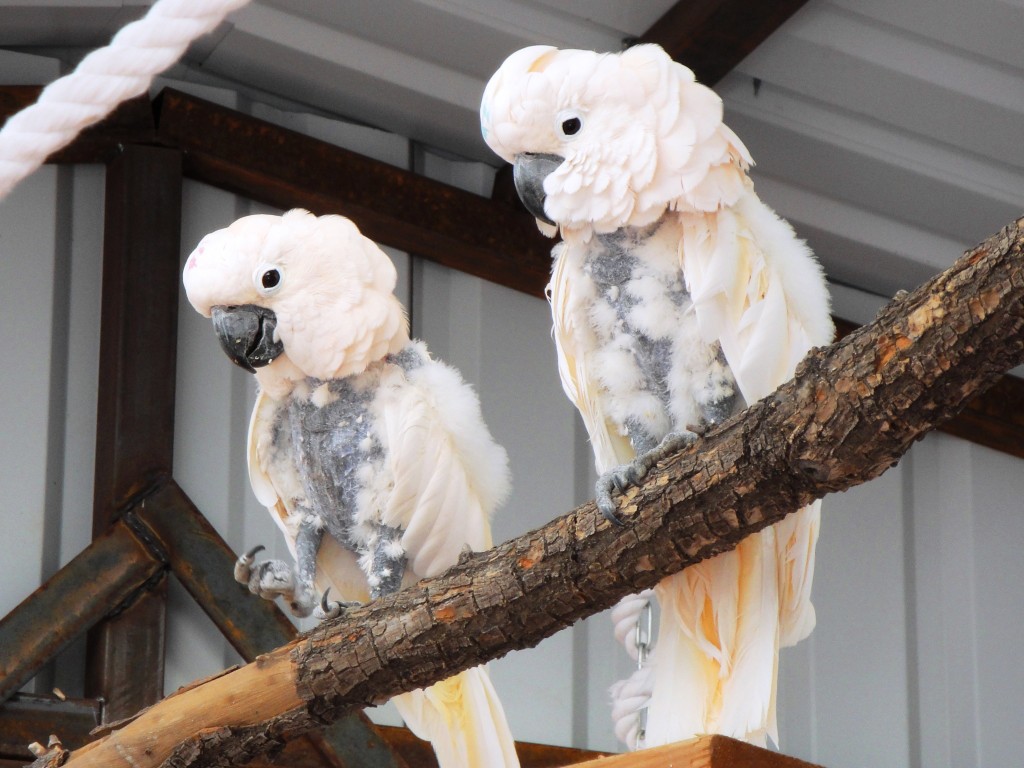 Sassy and her sister Cosmo (another story for sure!) live in a window covered room at the Oasis’s office. They share the room with several other severely handicapped Cockatoos who are their “flock.” Today, even with Sassy’s friends for daily company, when I come into the room, she and I continue to cuddle.

Editor’s Note: Sassy crossed the Rainbow Bridge May 1, 2010. She will remain forever in our hearts.