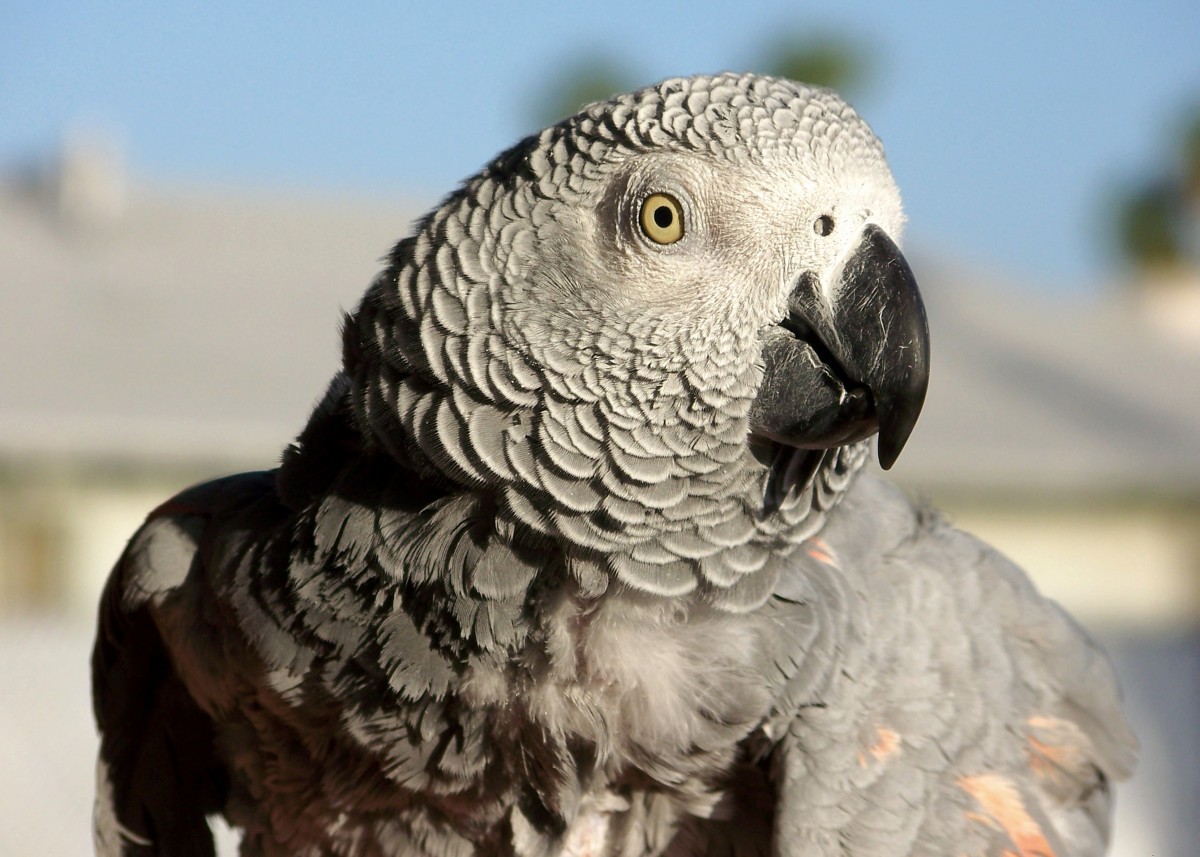 Velcro hatched in 1993 as a Congo African Grey Parrot. All we know about Velcro before coming to The Oasis Sanctuary is that she was thought to be a male and she shared her life with another Grey named Otis. When she came to the Sanctuary in June 2007 she arrived with what had been described as a minor wound on her right wing. In truth she had a badly broken wing that had been left untreated. Velcro was trying to chew her wing off because the pain was so excruciating. After attempts to close the gaping wound and help Velcro heal, her wing was amputated in order to save her life. Dr. Driggers, the surgeon, recalls the look Velcro gave him upon recovering from anesthesia – a look that said, “Thank you. That hurt so bad and now it doesn’t hurt.”

Velcro came to our foster care at “Chez La Rue” immediately after surgery that July day. Velcro’s life was spent swinging from periods of self-mutilation to periods of great happiness with almost no chewing. Our solution to providing Velcro with happiness and security was to offer ladders from counters to the floor so that she could explore. This freedom to climb up and down her ladders, to eat and drink on her own schedule, and to rest and play was what Velcro seemed to want the most. We surrendered our home to her wanderings. When visitors, who knew and loved Velcro, would come to visit, the first thing said was “Where is Velcro?” Then Tom would call “Velcro,” and whistle a special call. In moments we would see her appear or hear her call to let us know she was just fine wherever she was hiding. 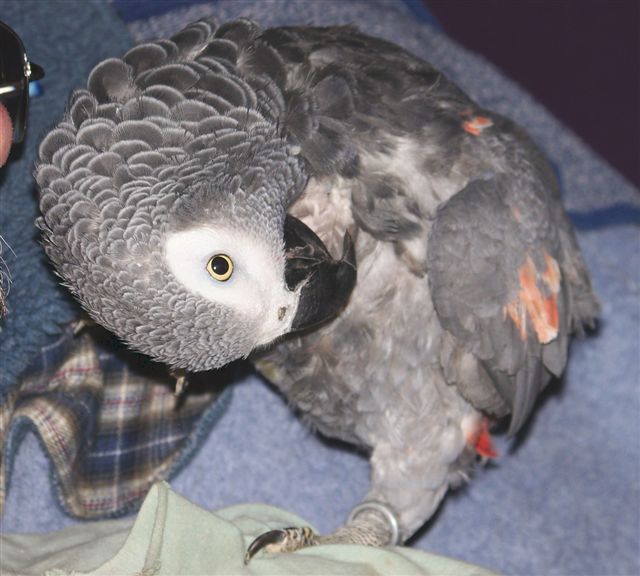 Velcro had a very rocky recovery period. As time went by, Velcro’s behavior, mental and physical health ebbed and flowed, with periods of wellness and periods of serious self-mutilation and a new problem: skin infections on her tail. The trips to see Dr. Driggers seemed to be countless as we tried to ease Velcro’s mental and physical symptoms. We used physical and drug intervention to keep Velcro from mutilating herself. X-rays had shown that numerous falls onto her back and tail had caused a compaction and distortion of the sacral vertebrae in her spine. Dr. Driggers was convinced that this vertebral compaction was the source of the pain that drove Velcro to mutilate herself. It was then that we even discussed euthanasia.

But, even in the worst times of self-mutilation, she seemed to be a happy and loving parrot. She liked nothing better than to sit with her Daddy, Tom, on his chest snuggled up to the left side of his chin. She would snuggle with Daddy for hours if allowed. It was clear that Velcro had a strong desire to live.

Finally, on the days that preceded her death, I became more concerned than ever with Velcro’s behavior. I sought advice, as I so often did, with our bird experts at the Sanctuary. Secretly I was thinking we might be approaching the time to make the very hard decision to euthanize dear Velcro. Three days before her death, I made arrangements for Velcro to take a “vacation” back at the main Oasis location where she could be close to other Grey Parrots.

Then on Sunday morning, June 2, I knew that Velcro was in a very bad way. I rushed her to Dr. Driggers office. When we arrived it was determined by x-ray that Velcro had two eggs inside her. She was not able to push them out. She needed physical intervention to remove the eggs. She was anesthetized to do the procedure. All went as expected, and although the prognosis was guarded, the doctor expected her to recover and be fit for a later operation to spay her.

As Velcro was waking from the gas, she just stopped breathing. Her heart stopped. She could not be revived. She died on the operating table.

This is what I wrote to my friends and colleagues when I came home minus my little Velcro:

“Yes, I was desperate for a time. As I sat in my car sobbing, I felt a calmness come over me. I am convinced Velcro was consoling me. Her message to me was, “I am happy now. It was my choice to die. I am fine.”

“So, as hard as it is, and as many tears as I shed, Velcro wants me and us to know that she chose her time to die. I have a void – a gaping hole that Velcro’s presence filled. Her presence is a spiritual vapor now and I have not adjusted to the void. Clinic staff were perplexed because Velcro was recovering normally from the anesthesia, Then her heart just stopped. Medical explanation could be that her body was overwhelmed by the trauma, but Velcro’s spirit TOLD me she CHOSE to go.”

“Have we reclaimed the kitchen stove, the bathrooms, and the closets with Velcro’s passing? Perhaps. But I would much rather have Missy V occupying the space and filling my heart with concern and joy and wonder.”

You see, happiness is not only on this side of existence. There is happiness in the spirit world, too. And Velcro loved us enough to ease our pain and let us know that she is finally happy and pain free. I absolutely know that Velcro will reunite with Tom and me and we will be happy together.

Do yourself a favor, find the song by Willie Nelson, “Angel Flying Too Close To The Ground.” It is Velcro’s song.

Phillipe The Early Years By Sybil Erden, Founder Phillipe was one of the first Macaws…