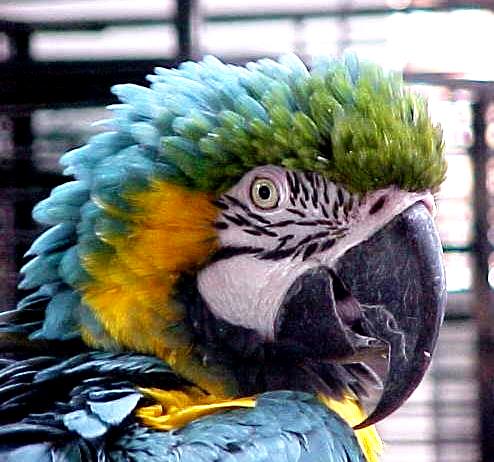 Tiki is an 18-year-old Blue and Gold Macaw. She arrived at The Oasis shortly before Thanksgiving in 1997. Tiki had lived the first sixteen years of her life with one family. The woman whose companion Tiki was, was a divorcee who doted extensively on the bird. They lived in a single family home. Tiki had full run of the house. She was happy, well cared for and, in a word, spoiled. ‘, ‘

When Tiki was fourteen, the woman met a new man. After a period of time, she and Tiki moved from the home they had lived in, into an “adult community” condo. It was then that Tiki”s normal raucous cries of happiness became contentious. Neither the new husband nor the neighbors looked favorably on the “noise.” Although the woman still worked outside her home, the husband was recently retired and at home daily. He complained about the noise. The neighbors contacted the “neighborhood association” and threatened a lawsuit if the “noise” didn”t abate.

Rather than consulting a behaviorist, or selling their new home, or leaving the new husband, the woman consulted her veterinarian whose solution was what he described as a “simple” operation….

Devoicing is not a simple operation. Although a similar and an equally barbaric procedure is routinely perpetuated upon dogs, it is a far more complex and dangerous procedure on birds. Parrots and other avians, unlike mammals, do not have vocal cords. Birds make sound by very minute and precise movement and vibration of air through the chest. Birds have extraordinary control of the muscles of the chest and of air through the thoracic cavity.

Devoicing is a procedure developed for the poultry industry to silence roosters. Seventy to eighty percent of the roosters who undergo this surgery die, usually from secondary infection or from swelling which shuts off their airway.

The surgery requires that an incision is made into an area of the bird”s body, just below the crop, above the breast bone called the “thoracic inlet.” This is the doorway, if you will, to the thoracic cavity, the area of the parrot where the heart, lungs and some of the air sacs lie packed together.

Once in the thoracic cavity, there are several methods which are used in order to devoice the bird. They all involve scarification of the inside of the chest muscle walls, making controlled movement of the muscles impossible. One such method is a primitive cutting of the muscle walls, which will scar as they heal. Another is the painting of acids onto the muscle with the same result. Yet another is the bonding of a fiberglass mesh to the chest wall. All of these procedures cause intense pain and swelling.

A small percentage of birds, twenty or thirty percent, survive this barbarism. Those who do not get secondary infections from the toxins now within their bodies, or who do not choke to death from the swelling of their tissues closing off their airway, either cannot make noise at all, or as in Tiki”s case, make ghastly gutteral noises.

Before the surgery, Tiki was reported to have had a vocabulary of over twenty words. Today, four years after surgery, she “barks.”

When Tiki”s original owner went to the veterinarian who mutilated Tiki, she was not apprised of the danger this surgery would put Tiki in. And she certainly was unprepared for the psychological damage that devoicing caused Tiki. Vocalizing, speaking, calling, are as intrinsic a part of Macaw life as our speaking and singing are to us. The permanent removal of their voice is as horrendous as pinioning; the removal of a portion of a bird”s wing, in order for them not to fly. From a happy talkative bird, Tiki became withdrawn and aggressive, particularly to the new husband. Although she loved her bird, the woman considered euthanasia for this unhappy Macaw.

Fortunately, a mutual friend recommended that Tiki come to The Oasis.

Shortly after Tiki arrived at the Oasis, I contacted the veterinarian who is the Chairman of the Ethics Committee of The Association of Avian Veterinarians (AAV). I imagined, in my ignorance, that the AAV would find devoicing to be an unethical practice. I wanted to know what could be done about the veterinarian (one of only two in Phoenix who do devoicing) who performed the surgery on Tiki. To my dismay I discovered that the AAV”s position on devoicing is that it in not an unethical procedure. I was informed that so long as the surgery was done “under anesthesia”, and that the owner was “informed” and gave “consent,” that it was ethical and therefore condoned. The doctor told me that he personally saw devoicing as a “last resort” before euthanasia. Listening to him, I wondered, silently, what the AAV”s position was on the ethics of euthanasia…

It took two weeks before Tiki would step up on a stick for me. Two months before she would step onto my arm without biting. She is on her play stand in the kitchen/great-room all day, near a number of other birds…Macaws, Cockatoos, an Amazon…but she doesn”t care to interact with them. Tiki does not know she is a bird. Although it took several months, Tiki and I have bonded in a way I have never done before or since with one of these magnificent blue birds. Never is she happier than when she”s preening my eyelashes or sitting on my lap. Tiki will never will regain the voice she had, the ability to speak as she did, nor will she be able to scream at dawn or dusk for the joy of being a Macaw.

Tiki is safe here at The Oasis. She has never fully regained her sense of carefree trust, particularly toward men. But in her great, eye-flashing, silent way, Tiki tells me she knows that she is finally home. 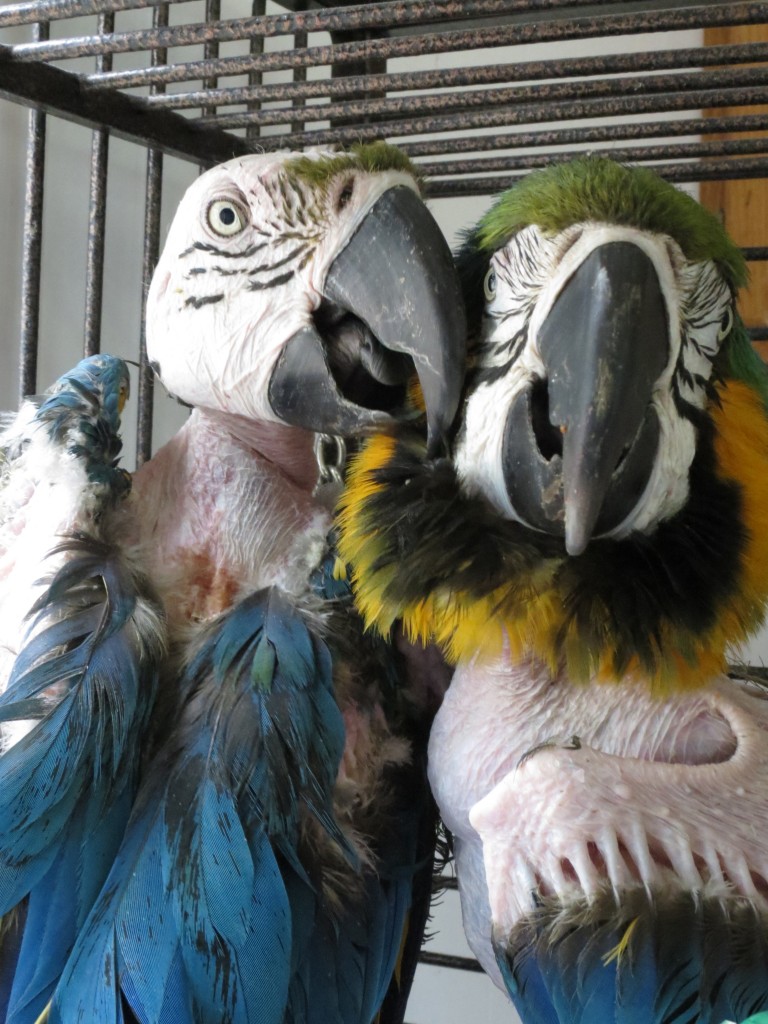 By Janet Trumbule, Executive Director of Administration – August 22, 2013 If you’ve had a…

The Story of Skippy

By Sybil Erden, Founder Skippy, a Lesser Sulphur-crested Cockatoo, was bounced through seven homes and…