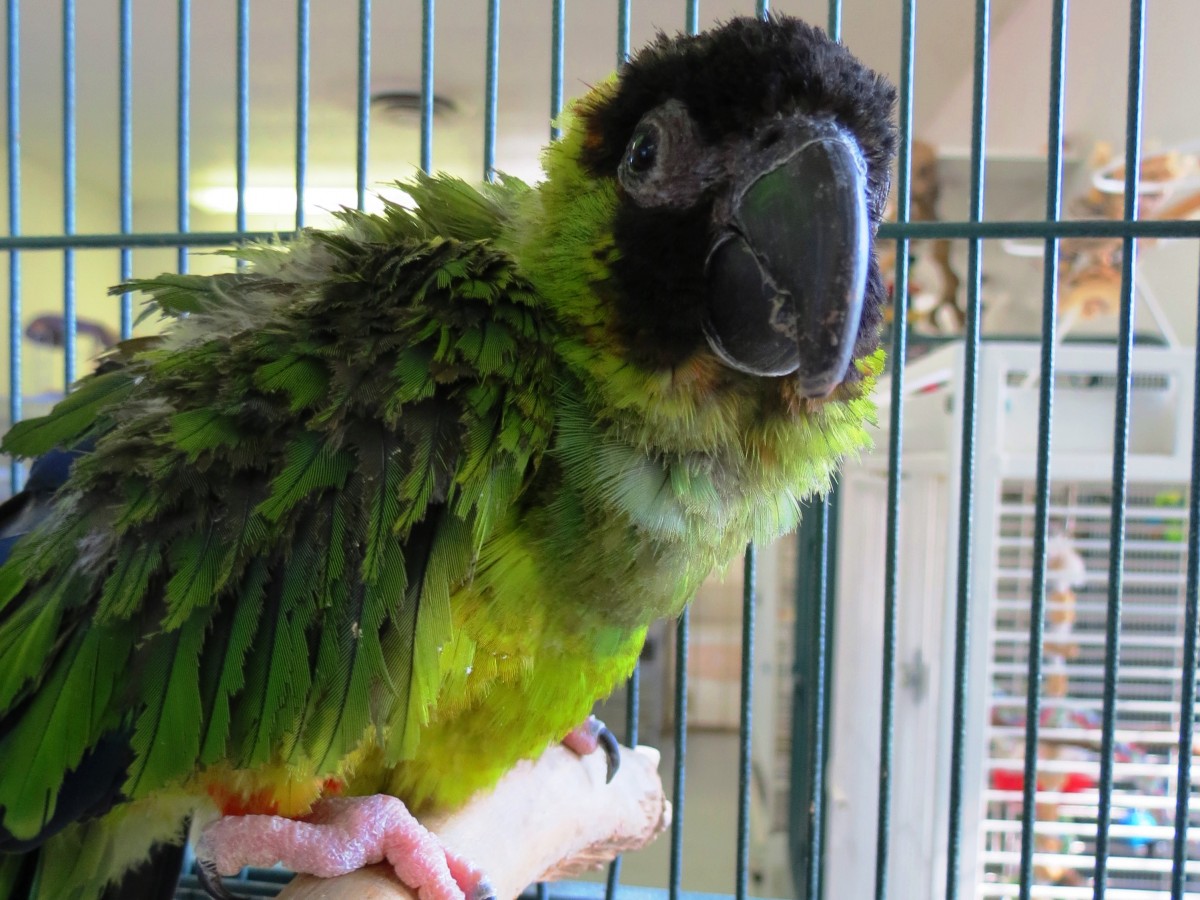 I bought Clovis early in 1992 from a local back-yard breeder. Clovis was 11 months old. I already had several other birds, but. I wanted a hand-fed, hand tamed bird. When I met Clovis I fell in love with him. Clovis is a beautiful bird, colorful with well defined markings. When we met he overcame an initial shyness in moments and sat on my finger and shoulder, giving me kisses, playing with my glasses and earrings. He has an assertive, affectionate personality. Clovis is spunky and full of life, as well as occasionally loud and abrasive. He”s much like a perennial two year old.

Clovis and I bonded quickly. Since I work at home, he and I spent much time together. At 11 months, when I first met him, he was beginning to talk. By 18 months, he was saying “Hello”, doing various wolf-whistles, and on occasion – only when I am working at the computer, my back to him, ignoring him – would ask “Whatcha doin”? Whatcha doin”?” until I responded.

Of all my pets Clovis is my favorite, my baby. Normally I am awakened in the morning by his cawing and “hello”-ing from the far end of the house. Before I begin preparing the fresh fruits and vegies I feed the birds, I take Clovis out of the cage and he sits on my shoulder while I work. 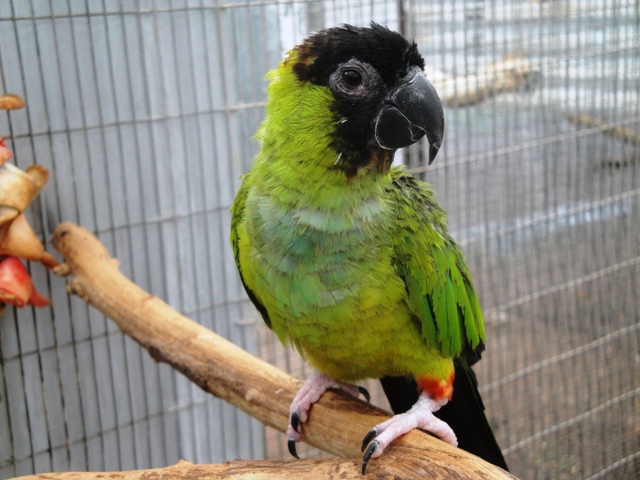 Our household consists of my husband Jerry and myself, numerous cats, dogs, birds, fish, chickens and sheep. Although Jerry cares for animals, he would never choose to undertake the amount of time it takes to properly care for them. Therefore it is understood that these are “my” animals, my responsibility. As an artist and writer, I have made sure that I am able to maintain my studio/office at home. When I go out of town on business, my husband most graciously spends an hour and a half or more each day tending to my friends. I usually am not gone for more than 4 or 5 days. This summer, however, I was going to the former Soviet Union for almost four weeks.

The day before I left I saw that Clovis was not feeling well. On that morning he was sitting quietly in his cage. I checked his food bowls and it was apparent that he hadn”t eaten. Although he hopped out of the cage onto my finger, when he climbed onto my shoulder, he only nuzzled my neck and wanted me to hug him. With Clovis sitting on my shoulder, I rushed to call the vet”s office and insisted that they allow me to bring him in immediately.

The veterinarian”s technician weighed Clovis: 133 grams. This is several grams heavier than one would expect a Nanday to weigh. Clovis was listless and depressed, and becoming sicker in front of our eyes. The doctor asked me a lot of questions. Were there any recent avain additions in close proximity to him? Had I brought any imported birds into the house? How were the other birds acting? Could he have eaten any plants that would poison him? Had I used pesticides of herbicides in the house? I answered “No” to all the questions.

We decided to keep Clovis at the hospital, at least overnight. They would run some tests. Knowing I would be leaving the country the next morning for several weeks, I handed over a credit card and gave the doctors carte blanche to do whatever they needed to save my little friend. I hoped my fears were groundless and that the next day he”d be home.

I was very concerned about my husband”s ability to cope with a sick bird; would he be able to hand feed or medicate Clovis as needed? Jerry had no experience in such things, but said he would do what he could. I called the veterinarians” office several times that day and again first thing in the morning from the airport before I left the country. No, he was no better. No, they had no idea what was wrong. A virus perhaps. Or poisoning.

With a heavy heart I flew half way around the world. Although my husband and I had originally agreed to speak once or twice a week, with Clovis sick, we tried to speak every day or every other day. Two days after I had left the US, Jerry and I were able to make contact. He told me the terrible news. Clovis was not expected to live.

The doctors had X-rayed Clovis and discovered this stomach and much of his digestive tract filled with tiny pieces of lead. I was baffled and could not imagine where he had gotten the lead. With Clovis still in the hospital, Jerry went through Clovis”s cage, removing all metal toys – and then, a day or so later, Jerry discovered a small stained-glass ornament hanging in the window next to the cage. The lead had been chewed off all around the outside of the ornament. I had recently installed a larger, more spacious cage next to the window for Clovis and hadn”t thought that he would reach through the cage to play with items, such as this ornament, now within his reach!

Since my return home, the doctors gave me several articles to read about heavy-metal poisoning in fowl in general and caged parrots in particular. I have learned that leaded windows, toys with lead weights or bell clappers, costume jewelry, fishing weights, lead-based paint on walls or cages are among the major contributors to the lead-poisoning of our pet birds.

Jerry and I spoke again the following day. Clovis was doing no better. The doctors had decided that home would be less stressful for Clovis than the hospital. They had begun chelation therapy. This therapy for heavy-metal poisoning consists of intramuscular injections three times a day and normally continues for five to seven days. They injectioned a drug called calcium ethylendiaminetetraacetic acid (Ca EDTA) which is used to reduce the amount of lead being absorbed by the blood and organs (muscles, spleen, bladder, nerves etc.) This gave Clovis time to pass the lead through his system.

Since the pieces of lead were small and spread throughout his system, surgery was not indicated. Instead the doctors also told Jerry to feed Clovis a mixture of Metamucil and peanut-butter, to help speed up the process of moving the lead out. After the first day, Clovis would not eat the peanut-butter mixture. The veterinarians had to force-feed Clovis three times a day when they gave him the injections. Jerry told me Clovis was so weak he couldn”t stand; one leg or the other would occasionally give out and curl up. Clovis sat on his perch, wings drooping, head tilted to one side. The lead was causing muscular paralysis as it was being absorbed into his system. Jerry thought that Clovis would surely die. Later the veterinarians admitted that they too held out little hope for my avian friend.

Jerry and I continued to speak once a day. Clovis was no better. Jerry sat with Clovis, holding him and talking with him. I was worried; I would be traveling and unable to reach Jerry by phone for at least two days. Assuming the worst, I told Jerry that I knew he was doing his best, and to tell Clovis I loved him.

During the next two days I became ill with salmonella food poisoning. I was so sick that I was hallucinating. I was vomiting and running a fever. I imagined I knew how sick Clovis was. In my delirium I believed that my illness was somehow helping Clovis purge his poisoning! I knew I would recover, but wondered whether Clovis would. I wondered whether he felt tortured or whether he somehow understood that Jerry and the doctors were helping him. I decided that if Clovis not doing better when I spoke to Jerry again, that perhaps they should just make him comfortable and let him go…

A few days later, when I was feeling weak but better, I spoke to Jerry again and heard the wonderful news; Clovis was doing better! Although he was still weak, his new X- rays showed all but a very few tiny pieces of the lead to have passed through his system. The shots and peanut butter-Metamucil mixture had done the job! The veterinarians decided to discontinue treatment, feeling the shots and force-feeding would create more stress than good at this point. On the same day as his final X-ray, Clovis began to eat on his own, and even took a bath. Within several days, he began to caw softly and shortly thereafter began to say “hello” again.

Ca EDTA often has seemingly miraculous results. A severely poisoned nearly dead bird may show response in as little as 24-48 hours. When the poisoning is chronic, i.e. small amounts of lead over a longer duration of time, it may take several weeks before real improvement is seen. It has been reported that even a bird having seizures or going blind from heavy-metal poisoning can fully recover. Since symptoms generally do not appear for several days or a week after ingestion of heavy metal, it is crucial that immediate treatment is begun on the onset of symptoms. Symptoms can include, but are not limited to, lethargy, weakness, depression, vomiting, bloody urine (especially in Amazons), diarrhea, head-tilt, blindness, circling, convulsions, paralysis, central nervous system abnormalities.

Since these symptoms are so general and can occur with numerous illnesses, an X-ray is often the easiest way to detect lead-poisoning. Clovis was fortunate that we had several doctors at a near-by veterinary office who were well versed in avian diseases.

By the time I returned home, Clovis was slightly underweight and showing signs of the ordeal he had been through. But Clovis was becoming himself again. Imust admit, I was somewhat jealous of Jerry; he and Clovis have bonded very closely. It took a week for Clovis to decide that, yes, he still loved me just like before.

It is now six weeks since we took Clovis to the vet that awful morning. His weight is almost fully regained. His ragged feathers are again preened and glossy. His personality and spunk are restored. His shrill voice is the first thing I hear in the morning, cawing his “hello”. And the other day, as I sat here working at my computer, I heard Clovis ask “Watcha doin”?”

A post script: At the time I am writing I now have ten domestic-born birds. Clovis is teaching two of them to speak! One of my two four-month old hand-tame Quaker babies is now muttering “hello” and my young olive mutation peach faced love bird, Sergeant Peeps now tweets a very high-pitched “hello” as well as imitating some of Clovis”s other caws.

I would like to give special thanks to Dr. Teri Wiblin and Dr. Karen Klaus, and their staff, at the Ingleside Animal Hospital in Phoenix, Arizona for their perseverance and diligence, because without their intelligent diagnostic skills and their concern, Clovis would not be such a lucky Nanday Conure.