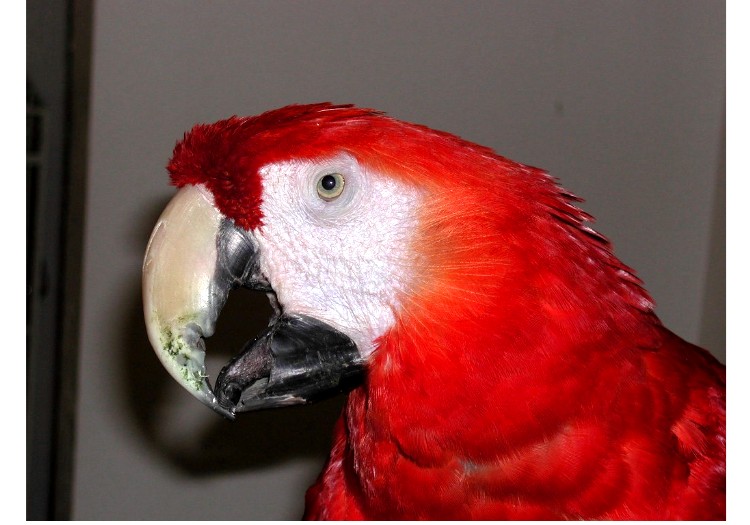 Have you ever had that more-than-special companion animal? Perhaps you have. He or she is the one who always brings a smile to your face or a tear to your eye; the one whose spirit stays with you always, influencing your thoughts and actions. The one who comes first to mind when you think of love.

For Tom and me, all our companions are very special, but on July 6, 2001 a once in a lifetime companion came to live with us. His name was Pierre and he was an elderly Scarlet Macaw.’, ‘

Pierre arrived on an airplane, in a carrier small enough to fit under the passenger seat. Tom and I decided Pierre needed to rest from his cramped quarters before we took him to his new home. As I invited him to come out of the carrier, he looked around, and then reached out to rest his head on my chest. That moment of helping him out of his carrier sealed our bond forever. I gathered sweet Pierre into my arms and he said “Hi!” I carried him through the airport terminal, so he would not have to go back into the cramped carrier. He was alert, saying “Hi” to all who noticed him.

Pierre maintained his sweet “Hi” nature throughout the time he lived with us. He was never cross, never mean. Very quickly I”d coined him my “Handsome Prince.” Tom often referred to him as “Eyore.” All who met him thought him a treasure.

Pierre and I weathered many trials in the year he lived in Arizona. He came with many infirmities, consistent with his advanced age. I treated him for his arthritis and was able to give him relief from the pain. I spent so many nights at his side as his breathing was labored and bacterial infections ravaged his body. I hand fed him to ensure he got the nutrition he needed when sick. So many days I took him to work with me, to encourage him to fight and mend. He rallied after each infection, but a little vitality was lost with each illness.

Finally, in May 2002, we thought we”d come to the end. The infections were too much, the body too tired. I prayed to God to heal Pierre, and my prayer was answered. Pierre recovered and he grew more and more vibrant, more and more exuberant through June, July and August. He rallied in a way that was amazing. He enjoyed a life of companionship with Tom, me and our other birds. He rejoiced – we could see it in his eyes. His call returned – loud and clear. He once again took joy in flying with my assistance. I thought he was going to live for years and years with me.

But that was not meant to be. On August 26, Pierre fell from his perch and bruised his cheek, a possible stroke. He was subdued that evening. The next morning he seemed back to his new-found self when I checked on him before going to work. Tom noticed nothing more than the bruise on his cheek when he brought him from his cage to his perch. The morning was “normal.” But, a little after two in the afternoon on August 27, Pierre began drooling and had labored breathing. Tom could tell that he was not well and took him up in his arms to cuddle him. Pierre held on for an hour for my homecoming. As I walked into the house, I heard Tom”s plaintive call. I hurried to Tom”s side, to find Pierre reaching up for me. I cradled him in my arms and cooed to him; Pierre rested his head on my chest, looking into my eyes. I realized he was dying and a rage tore through my body. I WILL NOT LET THIS HAPPEN! I prayed, I begged, but it was not to be. Within four or five minutes, Pierre was gone from this mortal life. He took his leave cradled on my chest, as we”d spent so many hours in the past year – the handsome prince and the servant, communicating in a oneness of spirit and love.

Good-bye, Handsome Prince. Your body may be committed to the earth, but your spirit soars and remains with me always, guiding my thoughts, lifting me up.

Phillipe The Early Years By Sybil Erden, Founder Phillipe was one of the first Macaws…