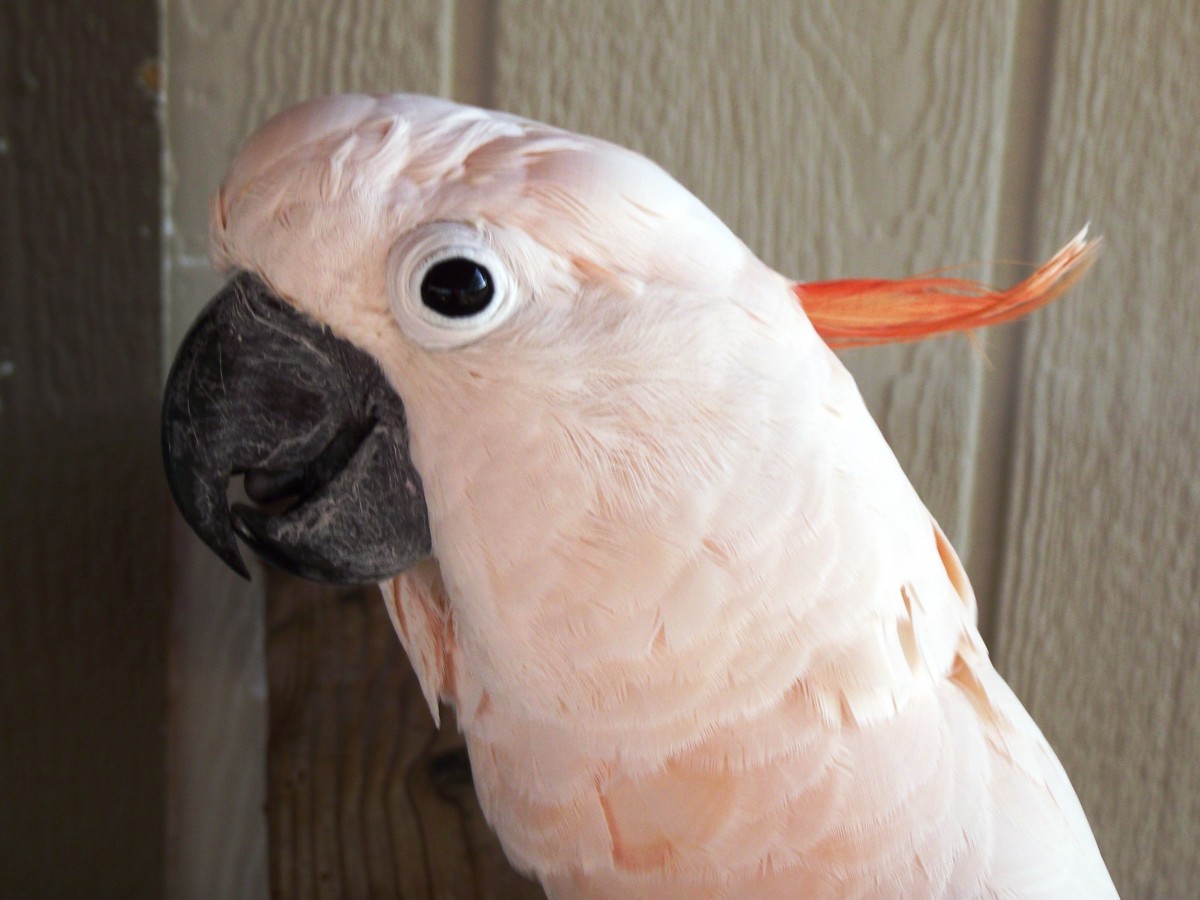 At “Discover the Oasis 2012” 0n May 12, 2012, Julie Dyson, our Associate Director of Administration, told the following story. It was so well received that we wanted to share it with all.

This is the story of Haley, a twelve year old, very snuggly, Moluccan Cockatoo.  Joe and I have been working here at The Oasis for over 6½ years.  Now along with day-to-day care of the birds, we also are trying to run the place.  A lot of people wonder how a simple couple from South West Indiana ended up here.  I think we have Haley to thank, or maybe curse for that.

All our lives Joe and I have had very different work schedules.  I have always worked in an office with basic office hours and Joe has always worked shift work which left us with very little time off together.  So I researched alternative careers for couples and I found caretaker jobs.com.  I found the ad for The Oasis Sanctuary and I thought “we are not bird experts but we own a bird”. Long story short we came out and volunteered for a week and loved it and Sybil hired us.

Now back to that part about us not being bird experts.  We could be poster children for people who should have never bought a bird.  Joe and I have always been dog and horse people preferring four legs and fur to two legs and feathers.  But for some reason we began visiting a local bird shop in Evansville, IN.  We kept meeting people who were there bonding with their baby birds putting in their 3 times a week visit for three months before they were allowed to take their birds home.  We thought that was really cool.

We found ourselves visiting this bird store every time we went into town.  So Christmas was around the corner and I thought Joe might be thinking about buying me a baby bird.  I thought he would pick something small like a Quaker or a cockatiel.  But boy was I wrong; he went right for the $2,200 Moluccan cockatoo.

Haley was still an egg in Georgia when he bought it.  The bird shop owner had to meet the breeder half way between Georgia and Indiana.  Haley was still a naked little baby bird the first time I saw her in her incubator.  The bird shop owner knowing that she was mine although I didn’t know she was mine, asked me to hold her while he cleaned her incubator a few days before Christmas.  I was in love.

I found out on Christmas that I now was the “mother” of that baby moluccan and that we now had to make payments on her and her $600 used California Cage.  After 3 months of going and bonding with Haley 3 times a week we finally brought her home.

Okay, here is where the real story of Haley and inexperienced bird owners really begins.  The bird shop people clipped her flight feathers.  We were like “okay that is what they all do”.  They forewarned us that if she stopped eating, and they were promoting us to feed her people food . . .but if she quit eating to bring her back.  Well she never quit eating people food or monkey biscuits.

Okay, we were wrong.  I remember the first day I came home from work and I instantly knew something was wrong.   My dogs, which always came out to greet me, never came out of the house into their fenced in yard.  I’ll never forget walking in and finding all my dogs cowered in corners of the house with their ears pinned down and looking away from me like to say “this is bad; mom is not going to be happy”.

I then saw Haley hanging off the side of an open door of our armoire flapping her wings like to say “woo hoo; I’m out of my cage and having a ball”. In that one afternoon she tore up two pairs of prescription eyeglasses & two remote controls.  Soooo . . . from that point on, she was under padlocks with keys securing all her food, water and main doors.

But that is not the worst part of the story.  While we were home, we let her out of her cage to run around and I wouldn’t really say be a bird but more like be a dog as that is what we knew.

It was on one of these days that Joe was home alone with Haley and found out that Haley had learned how to use the dog door.   She had let herself outside and went to explore the fenced in dog yard that had several trees and a garden pond.

Well us, being dog people, refused to shut off access to the dog door.  We just tried to make sure we watched her extra careful.  Well then she learned how to climb up the side of the house and started slowly tearing off the roof tiles of our house.  Sometimes we could get her to come down by using a broom stick for her to step on to.  If that didn’t work, we had to go to the extreme of spraying her with a garden hose to get her to flutter to the ground.  She always laughed at us which just made us madder.  Well, it cost us $4,000 to get our roof fixed and the contractors could not believe what caused all that damage.

Okay, so what to do?  We thought we would build her a front porch which cost us $10,000 to put on the front of our house so she could be outside but still contained.  What were we thinking? Porch screen mesh and simple lumber is no match for a cockatoo.  So has anyone been keeping up with the expense so far?  I hope not because I don’t want to know.

To add to Haley’s destruction are:

Any clothing with buttons or zippers

Any electrical or plumbing lines.  She destroys them all.

We have been through numerous garden hoses.  Haley always punctures holes in them and when we go to use them, they have all these jets of water shooting out where she bit hoses in them.

And most recent – We leave our hood left open on our Jeep to keep out pack rats, it is a common thing out here.  Haley discovered the open hood and decided to play mechanic and caused $1,200 in damage to electrical lines.

She also knows how to use her beak to let all the air out of our tires. 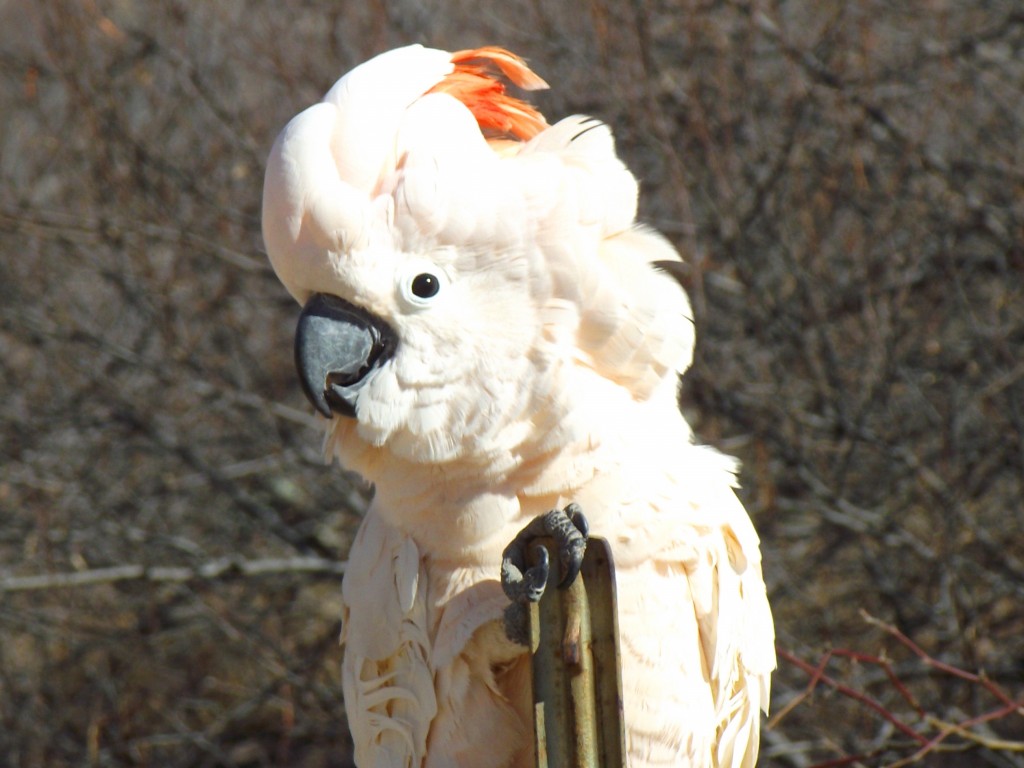 Haley has also had some fun with her pet sitters. The first one was my niece back in Indiana.  I told her the worse that would happen would be if she let her out of her cage and she would sneak away from her and she would climb up to the top of the house on the roof.  My sister, my nieces’ mother, told me she got a call the very first morning stating “birds on the roof, birds on the roof”.  They would not use my suggestion to use the garden house on a gentle setting and spray her until she fluttered to the ground.  So Haley strutted back and forth on the roof top laughing away at my niece, her friend and my sister.  After about 15 minutes my sister finally talked her down onto the broom stick and I think that was the last time Haley was let out of her cage while we were away.

Then there was the time a co-worker from the sanctuary watched my “kids” while we were gone.  The very first day she thought she had Haley locked up but had the padlock on the door incorrectly.  Haley got out.  Anne Marie came back to the house to find the microwave door open, the blender on full blast and the kitchen water tap on full blast.  She had also gone into the main bathroom and clogged the sink with a box of Kleenex and had the water running full blast and ran the sink over.  It took us four days to get the bathroom carpet dried out.

Two things I can add to the “for the better Haley destruction”:

She tore the diamond out of my original ¼ carat diamond engagement ring.  I was able to trade it in for a new wonderful ½ carat heart shaped diamond ring.

She tore up the plumbing lines on the back of the washer and Joe had to pull it and the dryer out to fix it and found a pile of dryer lint that could have been a major fire hazard if Haley hadn’t been there to point it out.

So if you know of anyone wanting to buy a new bird, you may want to share the story of Haley.  We always encourage adoption just like dogs, cats and horses or anything else.  We are still not the ideal bird people but we love them and we do the best we can.