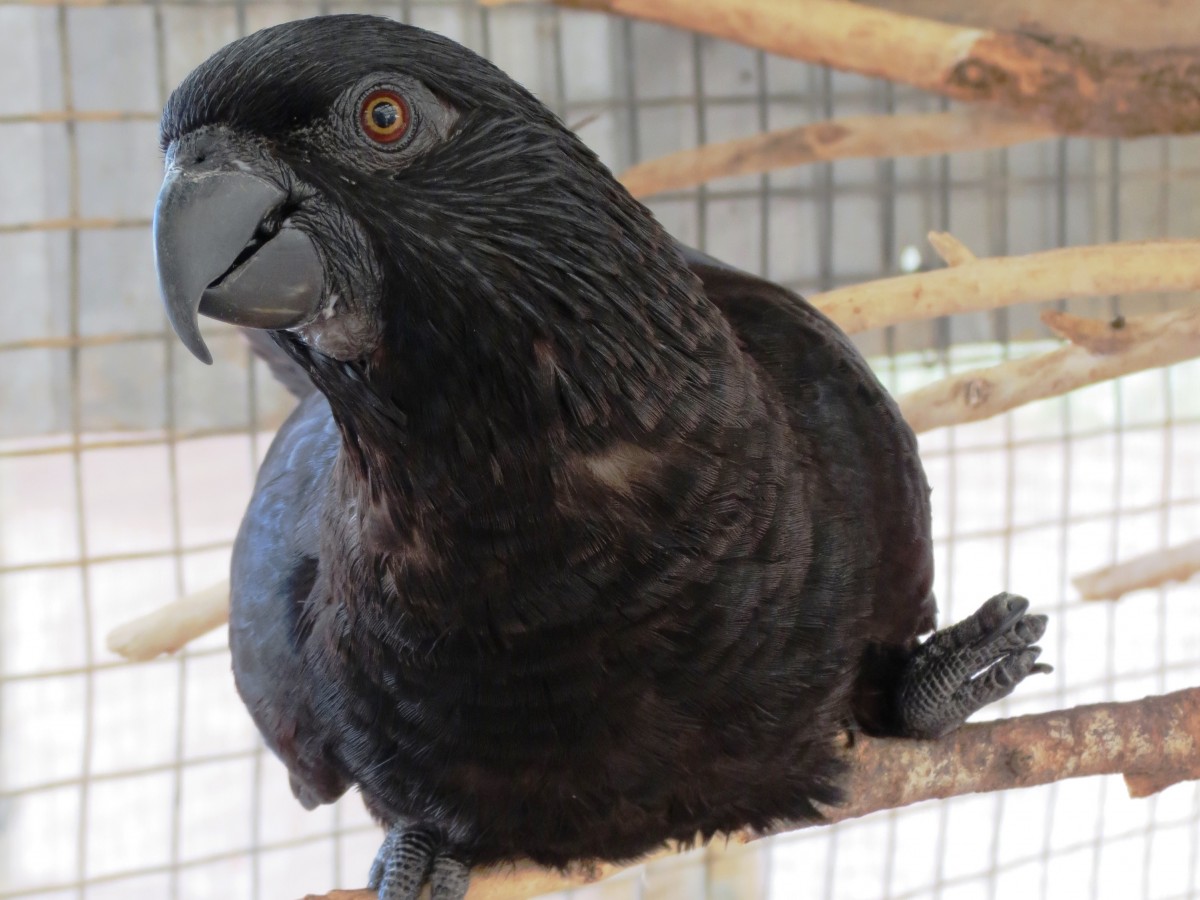 If you’ve had a chance to visit the sanctuary this article will make you think back and smile. If not…let me introduce you to Ophelia, our resident Black Lory.

Ophelia is large, about 12” in length. She is nearly all black in appearance, with colors of red and yellow on her under tail, and she has a violet/blue patch on her lower back. Many people do not associate black plumage with a parrot. However, in sunlight it is evident that this species is not truly black: but has a plum-colored sheen. Ophelia’s eyes are a striking orange-red with a distinct black eye ring. 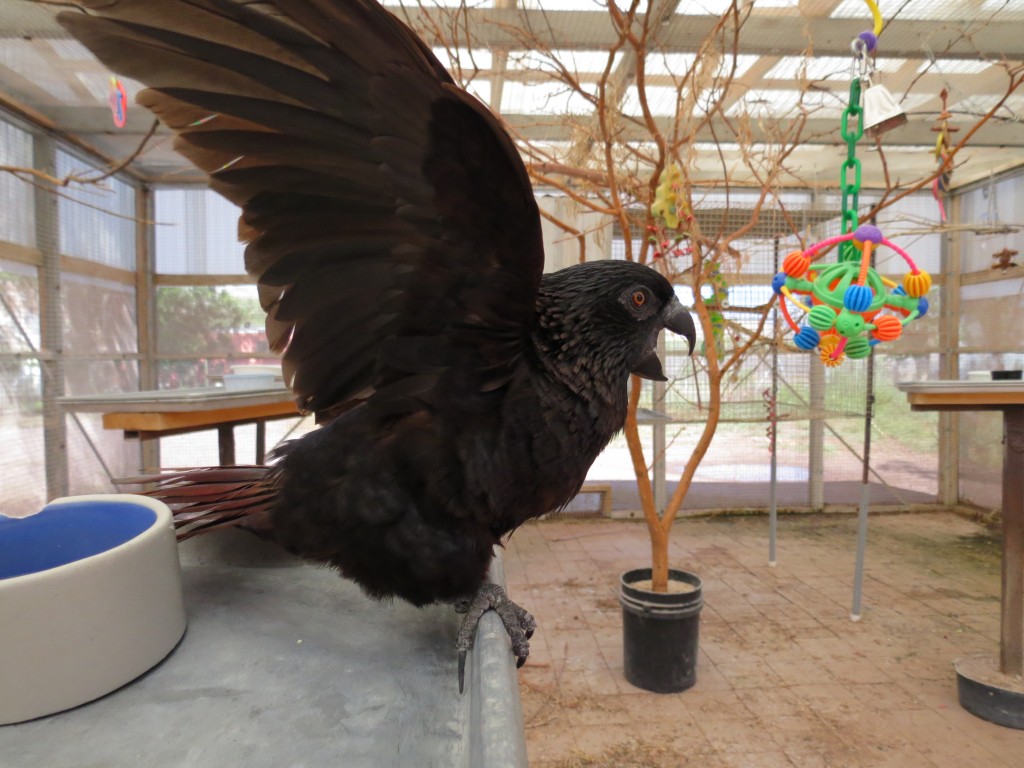 Ophelia and her brother Othello were taken in by a breeder in a trade, but when the breeder saw Ophelia’s deformed foot, he thought it best not to propagate a possible genetic problem. So this very fun-loving pair arrived in 1997 to live their life at The Oasis. Sadly, Othello passed away in 2008 and Ophelia missed him dearly. After the loss of her brother I felt that Ophelia was languishing.

At that time the Lories were housed in flight cages. Because of this I had no idea what fun we were in for when we converted the Lory building into a free flight aviary. It was a happy day when we were able to take all of the Lories out of their cages and see them fly, and really enjoy each other’s company. We were amazed at how social most of the flock was. Given the opportunity to interact with the birds in a more natural setting allows us to see a bird’s true personality. Well, Ophelia’s shined as bright as the sun and I knew that she would be okay now that she had a flock. 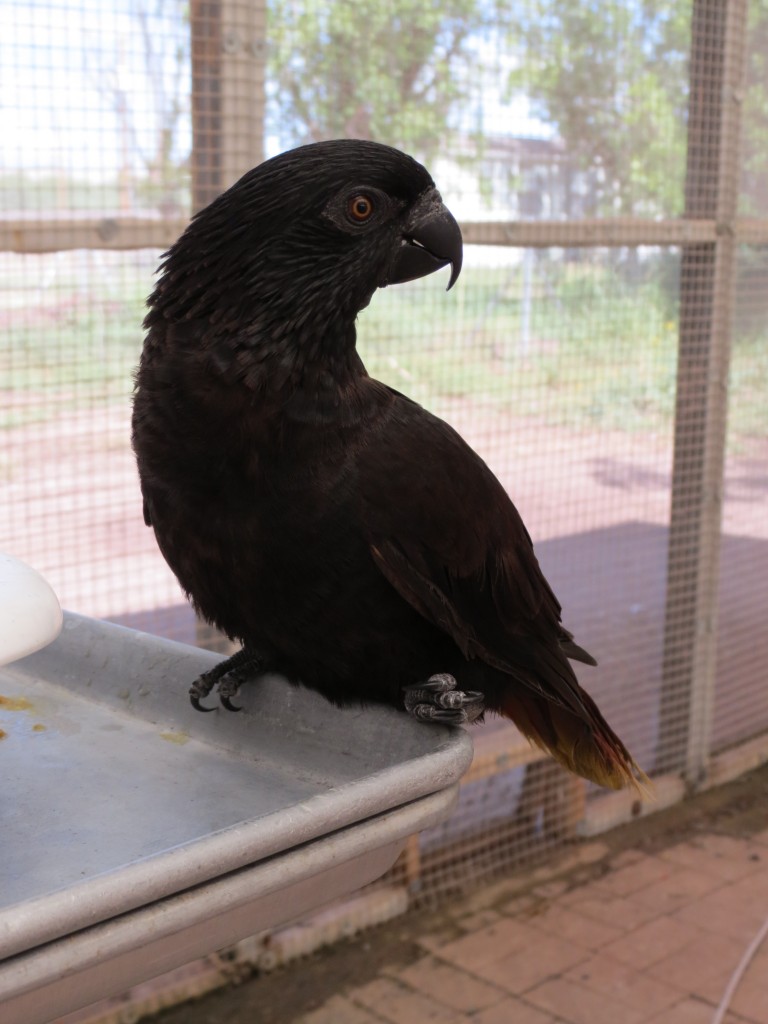 Ophelia is curious, extroverted and clownish, and she exhibits some unique behaviors. She is almost comical with constant and rapid head gyrations and jerks, with beak clicking and head banging. Sometimes to such extremes that I am afraid she will injure her neck or head. Anyone that has met Ophelia instantly falls in love…not only because of her outgoing personality but because of her immediate affection toward newcomers. When holding her she becomes putty in your hands and is very trusting of just about everyone. She shows kindness by rubbing her face against yours and using her long brush-tipped tongue to give kisses, all the while talking some kind of bumble jumble in a very deep quiet voice. Ophelia has a way of connecting with almost everyone. I have heard more than once from visitors “I want to take Ophelia home!”

Although Ophelia interacts well with people, on occasion she shows aggression towards her flock mates if her territory and possessions are not respected. Because of her size relative to some of our other Lories we have had to give her cage “time outs” until the tension has subsided. Even the best behaved birds have their moments.

Today, Ophelia is approximately 21 years old and in good health. While some Lories live well into their twenties and older, that is not necessarily the norm. We wish for Ophelia many more years of wonderful health, fun, lots of kisses and love.

A Tribute to my Handsome Prince

By Ruth Ann LaRue Have you ever had that more-than-special companion animal? Perhaps you have.…