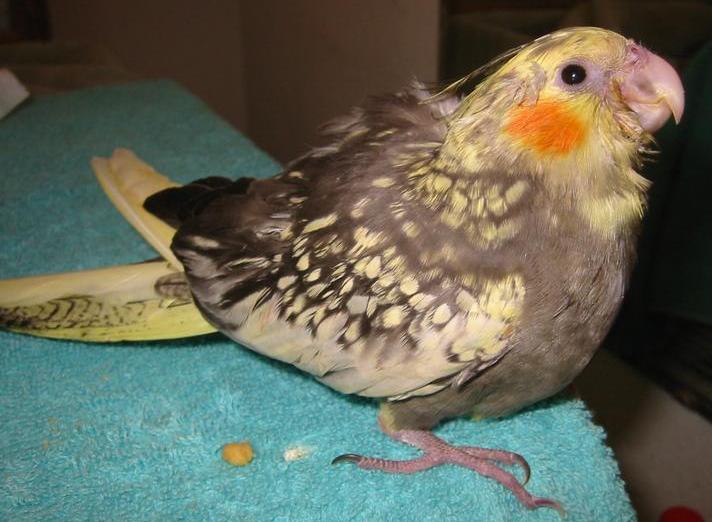 We rarely see baby birds here at The Oasis Sanctuary. Careful not to breed, we do not provide nesting sites and pull the few eggs that are occasionally laid by industrious and determined Lovebirds, Finches, Budgies or Cockatiels.

So Olivia was a rarity here.

I received a call from an animal-loving lady in Phoenix who, with her husband, had inherited a small backyard aviary with six Cockatiels when she bought a house. When cleaning the aviary one morning the lady was shocked to discover a new born baby bird on the ground and two infertile eggs in one of the boxes. The parents had thrown their baby from the nest. In a panic the woman called me and I suggested putting the baby back in the box. I also discussed pulling this remaining box once the baby had fledged…

…but the next morning she called me back. Once again the youngster was on the ground. The parents stayed close, occasionally coming and feeding the bird…but the little one was clearly in distress.

The woman wondered whether it was normal for the neck to be twisted and for the head to keep getting entangled in the baby’s wing… She had looked into hand-feeding the baby and learned about the difficulties and dangers associated with this. She asked me whether I could take the helpless bird.

Fortunately I was going up to Phoenix the next day and agreed to meet with them at my hotel. The husband and wife arrived with large cardboard box. Resting within, nestled in towels and an old t-shirt was a tiny two-week old, pin-feathered bird.

I had a heating pad and hand-feeding formula. I fed the baby with a syringe. She ate well. Happy to be warm, well fed and comfortable in a small carrying cage, the baby easily adjusted.

After bringing the baby back to the Sanctuary, I fed the skinny little bird five times a day. By the second week I cut down to four times a day. She gained weight quickly, from less than 40 grams up to almost 65 grams.

And in most aspects she developed in a normal manner.…

…but her neck was crooked and turned to her left. She would get her head stuck and entangled in the left wing. But as Olivia (as she was named) grew stronger she came to hold her neck in a more normal fashion and learned to un-entangle herself. Her back was still very obviously “hunched” and misshapen. But her wings grew strong, and she would flap enthusiastically as the feathers came in. She climbed around her cage and was active and alert. As with so many “special needs” birds, she appeared unaware and unhampered by these abnormalities.

I hoped that Olivia would live in the cockatiel aviary some day, flighted, with her cousins…but thought that if necessary she could join about a half dozen Cockatiels who due to wing amputations, sight problems or old age live indoors.

It had been eight years since I last had a neonate in my home. I had forgotten how emotionally satisfying it was raising a baby bird. For several of our staff members it was the first time they had ever seen a young chick. While we always kept in mind that Olivia was destined to live her life with other birds I cherished the time we had, helping little Olivia along her way.

During the next few weeks Olivia began looking more and more like a bird – her feathers filling in and growing a tiny crest. She perched on my finger, gripping hard and flapping her wings with all her might! On several occasions she launched herself and at one point flew six feet into a sofa! One day she circled the room and landed on both feet…

I brought Olivia to The Oasis’ Avian Veterinarian, Dr. Todd Driggers. He told me that her severe scoliosis was impacting her ability to breathe properly. He forewarned me that her life expectancy would limited. He explained that the limitations of her lung capacity would create a secondary blood problem: her blood would thicken. This is the body’s attempt to counteract the lack of oxygen by enabling the blood to carry more in the red cells.

In order to attempt to counteract the limitations of her body, The Oasis purchased a reconditioned oxygen concentrator. At some point in the past, we received a 20-gallon glass tank with a small bird play gym inside. We began oxygen therapy for several hours a day in this little glass play-pen.

Olivia was so full of spunk that if anyone can beat the odds, I believed she could!

Little Olivia lived in her oxygen enriched home for about three more months. During that time she grew strong enough to take a full flight around the room…once. But the scoliosis became worse and more pronounced as her body grew. One side of her body became so compressed that her air sacks and lung on that side received little if any oxygen. Eventually Olivia spent almost 24 hours a day with the oxygen concentrator going. During the times that she was not in her tank, I would hold her on my chest and read on the bed as she rested.

Finally, one afternoon, when I went in to check on Olivia in her little glass home, she was gone. I like to believe that her spirit now resides in a new, whole body…and somewhere, she breathes easily. And flies.

The animals we live with – A bird named Sassy

By Sybil Erden, Founder. Sassy and I fell in love the first time we met.…