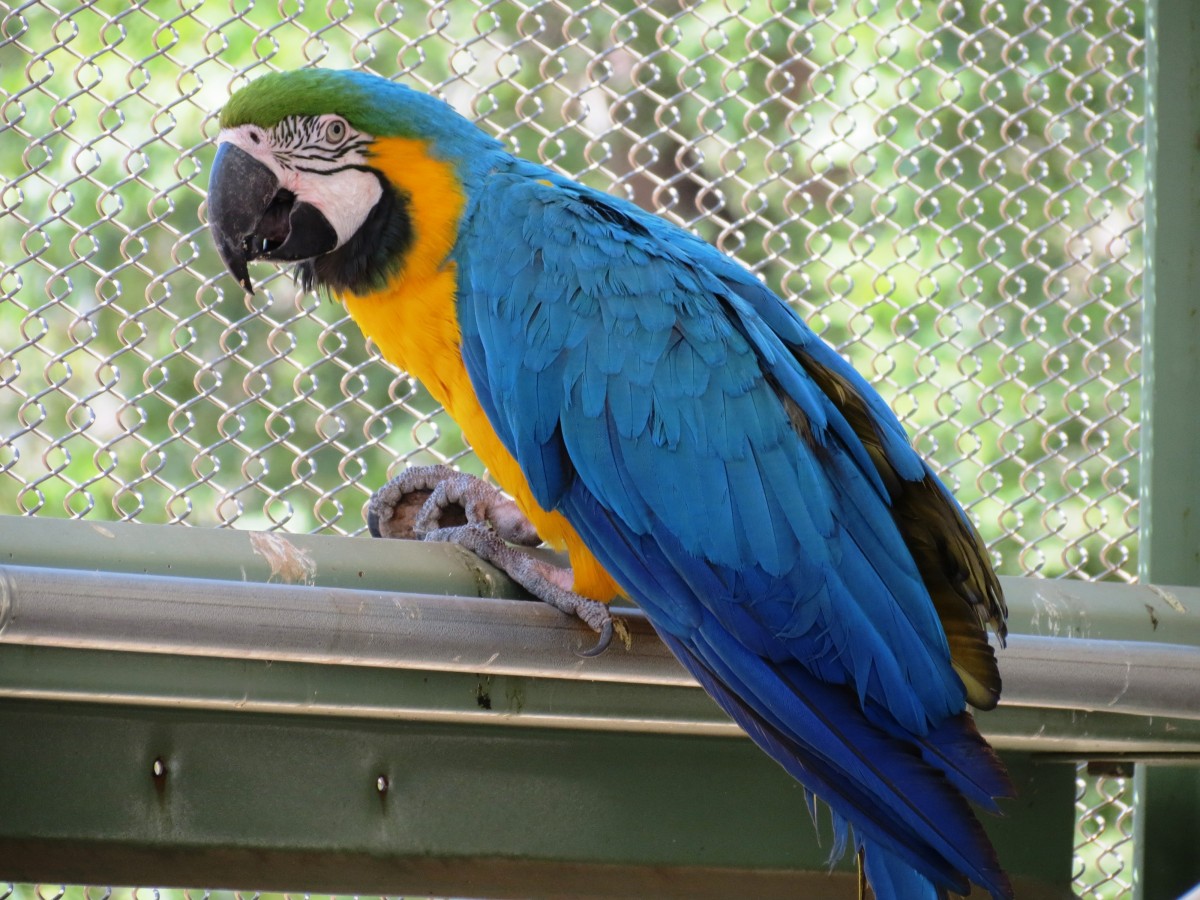 As most of you are aware of by now, since April 6, 2008, The Oasis been working almost daily to get an abandoned American Macaw named Gulliver back to the US. He was stranded in the Republic of Kiribati (Kee-ree-bas) in the area of the South Pacific referred to as Micronesia, when his former caregiver”s boat crashed and sank off Fanning Island. As I write, Gulliver is still at the USDA Quarantine outside San Diego. 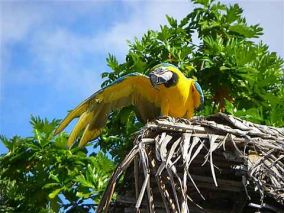 The short version of this long saga:

In December 2007, after being adrift for about a month, an American couple crashed their 42 foot boat into the reefs surrounding Fanning Island in the Republic of Kiribati (pronounced Keer-ee-bas.) This is on the Equator on the other side of the date-line, in what is loosely referred to as Micronesia. The couple were traveling with a dog, Snickers, and a Blue and Gold, Gulliver. They abandoned their animals when they were able to leave the Island. The animals lived under threat of death as there is a strict non-importation law in Kiribati. Additionally, both animals had left the US without proper paperwork to insure their re-entry.

The dog was adopted by Jack Joslin (Las Vegas) and removed from the island in April with the help of Hawaiian Humane Society. They also tried to Bring back Gulliver, but without success. Since Blue and Gold Macaws are CITES II (Convention on International Trade of Endangered Species) animals with II meaning Threatened — there were a myriad of difficulties in attempting to bring Gulliver back home. He did not have a closed band nor did he have a microchip, so there was no “proof” that he was in fact US captive-born. He was therefore treated as though he were a “wild” macaw!

By the time The Oasis was contacted, Gulliver had been in Kiribati for four months. His time was running out! We worked our way through numerous bureaucracies in the United States, as well as internationally, in order to get Gulliver back to The Oasis. We worked with the US Department of Agriculture (USDA), the US Fish and Wildlife Service/CITES (USFWS) as well as the CITES Secretariat in Geneva Switzerland, the US embassy in Fiji and the government of the Republic of Kiribati. We obtained a Private Detective (who worked pro bono) to gather information on the bird in an attempt to prove his US provenance. We had two attorneys (pro bono) working with us. There were people in Hawaii, people in Kiribati, people around the states, all working in an attempt to bring this beautiful bird to safety.

It took three months before Oasis Vet Todd Driggers and I were able to get all the papers in order and finally go to Kiribati to bring Gulliver back and into US. On July 8th Gulliver landed at the Port of Los Angeles and entered Quarantine.

Many people have asked why the original “owners” of the bird did not get the bird back.
It is complex, but:

The Oasis existed to “save birds one at a time” – birds for whom there are not other options. Gulliver certainly had no other options. But Gulliver also is representative of all the birds who have been abandoned everywhere: birds relegated to basements of garages. Bird dumped at Humane Shelters and pounds. Birds brought to Veterinarians to be euthanized when they re no longer wanted. Gulliver is the “Spokes Parrot” for them all. On July 25th I received the best possible news: Gulliver”s mandated USDA tests all came back negative and he will be released on August 7th!! Saturday August 9th we will have “Gulliver”s Celebration of Life” picnic at Pepper Grove in Balboa Park in San Diego from 11 AM to 3 PM or later. Bring your friends and family, a dish to share, your favorite non-alcoholic drinks and if you wish, a picnic blanket or lawn-chairs.

Media will be in attendance and this is our opportunity to show the public at large how many bird-lovers there are in SoCAl! I have been speaking with Bertha, who runs the Quarantine facility in San Diego almost daily. Gulliver went into Quarantine with a large supply of toys, good food, pellets, nuts, dried fruits and fresh produce, along with adequate funds for the facility to buy more. According to our ongoing conversations, Gulliver is talking and play and eating well.

He is an amazing bird; very accepting, accommodating and able to handle new situations without excessive stress. But I cannot wait to bring him out! By the time you read this I will be on my way to San Diego to bring our very special boy back home!

There are a number of people who need to be thanked.
First of all, this rescue would not have been at all possible without the help and financial support of the Friends of The Oasis and Team Gulliver!

Mahalo to you all!

I also want to thank the people who put me in touch with their resources at USDA and USFWL/CITES… none of this would be happening without all of you working together to help in this international effort!!

I know there are others I am inadvertently leaving out. My apologies to you, and know that I know full well that without you and your help, this effort would not have been successful. Last but not least, I want to thank all of you who sent funds and prayers and well-wishes. It would not have happened without all of you!

News stories about the shipwreck:

We deeply honor every parrot that has touched our lives and continue their journey to the Rainbow Bridge. Some seep into our hearts more deeply but all are cherished and never forgotten.

It is with deep sadness we share the news of Gulliver Macaw’s passing. Gulliver was a Blue & Gold Macaw who experienced some frightful adventures in his young life. Many know his rescue story and supported the efforts of Oasis founder, Sybil Erden, to ensure his safe return to the States to live his life at The Oasis.

Gulliver’s death was unexpected, and heartbreaking. While under anesthesia for a wound treatment, his heart stopped. The extensive efforts to revive him were in vain. Necropsy indicated cardiac arrest but also an underlying bacterial infection caused Gulliver’s systems to be compromised. Gulliver was just 14 years old. We saw him thrive for ten wonderful years, enjoying freedom in our Macaw Aviary. We love and miss you Gulliver…fly free forever.

The Story of Haley – An Oasis Sanctuary Ambassador