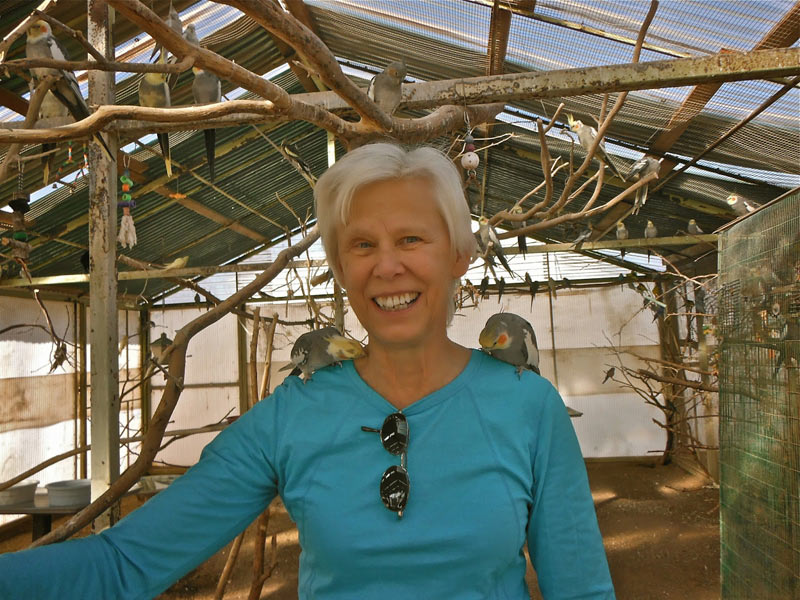 As a part of my Southwestern sojourn this year, I decided to spend a week at an exotic bird rescue compound. The official name is The Oasis Sanctuary. Getting involved in things that touch my life is a natural for me and so, since I possess a cockatiel it seemed a logical choice.

After scouring their website, which is quite robust and informative, I was ready to make the commitment. It took only a short email indicating my interest in volunteering and the specific days I would spend there. Within a day or two, the arrangements had been made and directions received. All that was left was the wait for my departure flight out of XNA.

They are located about one and a half hours southeast of Tucson, Arizona; half of the drive time is spent on a remote partly paved road. You lose cell service around the same time the paving ends. It is just part of the mystic. One could imagine that they are stepping out of civilization, but it isn’t true. The facility has all the conveniences that one could desire: satellite TV, internet connection, fully furnished accommodations and a fabulous star show every night. If none of this appeals to you, there is also a fully stocked parrot library for your reading pleasure.

I arrived on a Sunday, late morning. Just in time for lunch as luck would have it. So I unpacked all the food I picked up for the week in Benson and selected something simple for snacking. I was too excited to think about an entire meal. The hour crawled by at a snails pace and ended with the staff meeting at the office/house to pick up laundry (this is an ongoing activity here) and delivery the folks to the staging area.

The birds were housed in flight aviaries (where possible and no further injury could happen) there was one for macaws, female cockatoos, male cockatoos, ringnecks, cockatiels (ok, really, they call this one small bird aviary), African greys, quakers and lories. These aviaries were quite large and had lots of room for flight and places for the birds to naturally ‘claim their territory’.

They were also equipped with misting devices for cooling (and bathing) in hot weather, heaters and panels that could be opened to allow natural lighting during the day and closed to retain heat during the night. It was becoming quite apparent that the folks here had a very good system for caring for all 750 birds. The birds that had other issues and could not be kept with other birds were in smaller aviaries with few birds or in cages alone or with one other bird considered a mate.

As I toured the facility I learned that while the staff knew practically EVERY bird’s name, it was clear that I would not match that feat. Each aviary was designed for safety, bird comfort and feeding stations were specific to the breed and different in every case. It gave me great pleasure to see the care and compassion devoted to these abused and abandoned feathered creatures. I did see birds that had been abused and victims of their own self-destruction…feather picking. But most birds seemed well adjusted and quite happy and content to be there. Those that had violent histories are making the best of their remaining lives in smaller quarters. All the birds are greeted by name and examined daily for health condition.

The tour ended and there was not much left to the work day, so I got the job of giving showers to the birds in the barn, behind the food staging area. This is one of the loudest places in the facility, since most of the birds are macaws or cockatoos. I asked which ones liked to shower and was told the birds would let me know. That they did! Those not interested, just walked to the back of the cage. Those that enjoyed it kept coming back again and again. One African grey came back five times! He REALLY liked it. That was a great way to interface with the birds and get comfortable with them. Comfortable is a relative term. These are wild birds and they can give quite a bite — so one must stay alert and not provide fodder for aggressiveness. I am happy to report that I spent the week bite free!

During my week I was working in every area of the facility except for the male cockatoos…they are a little too feisty to allow anyone other than staff in. That was ok with me, I had a fabulous view from outside the aviary and could talk with them from my safe position.

The work day is divided into two main sections pulling the dirty food and water dishes, cleaning the stands and replenishing with fresh food and water. This is the morning activity. After lunch the aviary floors and cages are cleaned. The last hour of the day is spent closing the facility and doing a final check on the birds. Each day was a buzz of activity just to get it all done. If I did my nose counting correctly there were only 6 or 7 people on duty each day. So, yes, I pulled dirty dishes and dumped water, I scraped floors of bird doo and helped to hose it down, I brushed

trays and wiped them clean for food replacement. I filled gallon upon gallon jug of water for the birds. One day I spent an entire afternoon washing vegetables and fruit which got processed to small pieces and added to food dishes throughout the week. On my last day, they let me feed one section known as Pumpkin (a converted trailer aviary of cages) all by myself! I felt like I was part of the staff. Every day I played with the birds and received so much love that it felt as though every day, all day I was receiving bird love therapy. This was a week of hard work that was so rewarding I would do it again in a heartbeat. I have never met a group of more dedicated and hard-working folks who truly love what they do.

I learned about The Oasis Sanctuary 2 years ago, began making small donations and buying…

By Susan Platt, Volunteer March, 2015 Another day begins at The Oasis; it takes a…