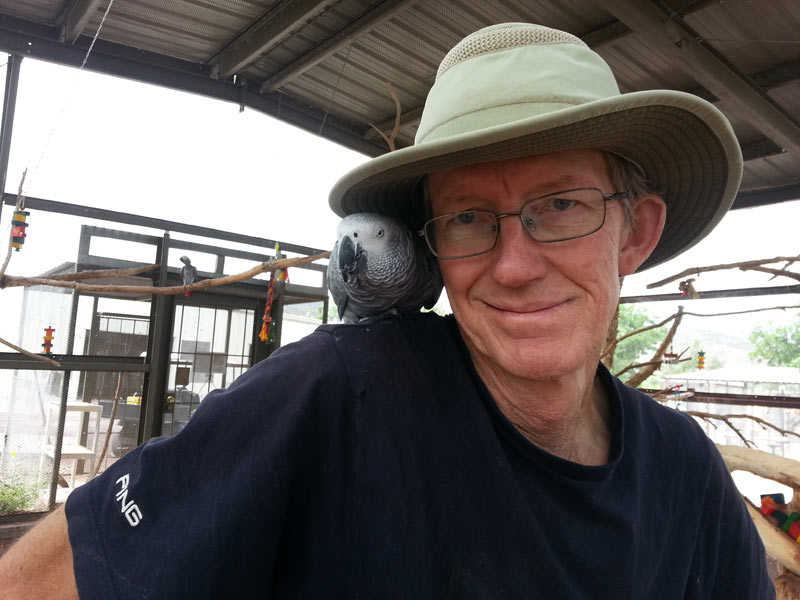 I sometimes tell people my interest in birds began with rock climbing. Unlikely as that may sound, here is how the story goes.

I came to Tucson to study geology, and along with studying rocks, found interest in climbing them as well. This led to opportunities to often see large and majestic birds and at some point I decided to get a field guide to birds and try to figure out how to tell a Red Tailed Hawk from a Turkey Vulture. Within a month I was sporting a pair of binoculars and visiting all the Arizona birding hot spots. My interest had gone well beyond just the raptors. My birthday rolled around, and my wife Ingrid took me out to eat and gave me a card saying that after the meal I was entitled to visit the mall petstore and select a parakeet for a pet. I was quite skeptical and somewhat ill at ease about having a bird confined to a cage, but I had also learned that my wife often has good ideas. She probably rues the day she started me down this road!’, ‘

This bird was so wonderful and such a pleasure to us all, that I decided that a bigger bird would be better yet. So about a year after “Darwin” the parakeet joined our household, a second bird – “Spanky” the blue fronted amazon became our second bird (this was in 1993). Spanky was a fabulous companion and lived with us for 9 years until his sudden death in 2002. While talking to the vet just after this, she said, “If you are thinking about getting another bird, you should talk to these people” and gave me a brochure for a seminar with Sally Blanchard being hosted by TARA. I called the number and had a long talk with Barbara Bailey. Somewhere during the conversation I remember her saying, “you are just the sort of person we are looking for,” which in the midst of my guilt and sorrow after loosing Spanky was pretty much the last thing I expected to hear anyone say.

I attended the seminar and it was there that I met Sybil, who was also a featured speaker. I approached her in the morning and asked, “so what the heck is the Oasis anyway” and she told me to stick around for her speech in the afternoon. One thing led to another, and at this point we have 6 large birds in our home (all adopted through TARA; 3 large macaws, 2 amazons, and an eleonora cockatoo). I use any excuse I can to visit the sanctuary; I love the birds, the people, and the quiet peaceful isolaton.

I don”t do much rock climbing these days, but still take any opportunity to be outdoors hiking, camping, or doing just about anything. Although I tried to dodge doing it the first several times I heard about it, I have ended up taking care of the Oasis website (I have been a software developer the last 25+ years). When I get fed up with sitting in front of the computer, heading out to the sanctuary to take pictures is always a handy excuse to get away from the keyboard. They treat me as a friend, and sometimes even put me to work too!

P.S. The bird on the right is “Jello”, one of the no-longer wanted macaws we adopted.

From an early age, I have always known I would dedicate my life to interacting…

Volunteering at the Oasis Sanctuary – Somewhere near Benson, Arizona

By Ellen Thompson January 24, 2014 As a part of my Southwestern sojourn this year,…