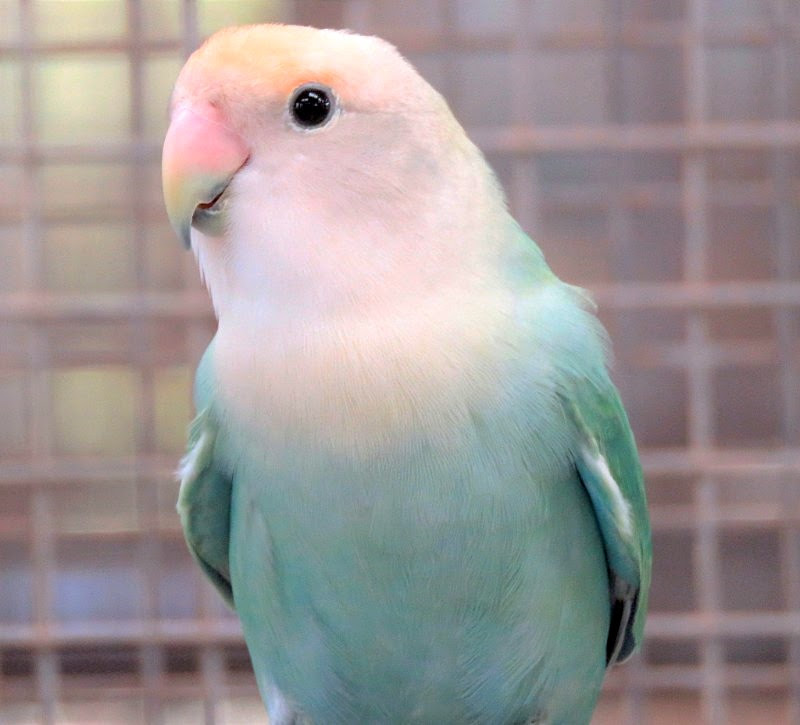 In the Winter of 2017 things could have turned out very differently for HeWho. He was an escaped bird who found himself navigating the urban sprawl of San Jose, CA. Facing uncertainty this little lovebird had the will to survive. Although fate took a scary turn it led him to his rescuer.

An observant bird watcher happened to notice a hawk nearby with prey in his talons. Something spooked the hawk, or maybe he got a good nip on the toe, and he dropped his prey….an injured, but still alive Peach-faced Lovebird. The gentlemen scooped up the little bird and knew he had to help. He found an avian veterinarian that immediately saw the injured lovebird and treated his wounds. With medications and TLC the prognosis for survival was good. This was a young bird (his band indicated he had hatched in 2016), strong and full of spunk. He was not ready to give up.

While recovering, the gentleman and his family had to call the bird something. He was rightfully named “HeWho Falls From Hawks Talons”….HeWho for short! Eventually HeWho‘s wounds healed and he regained his strength, and his ability to fly. The family gave him every opportunity to stretch his wings in a safe room. But within a few months it was clear that their regular travels were not conducive to keeping a parrot. So they sought out a place where HeWho would always be safe. They had grown to love this little bird in just a short time and wanted only the best for him.

When they reached out to The Oasis we knew that giving HeWho safety and stability would be the right thing to do. He had already experienced some frightening events in his short life. So in early 2018 HeWho arrived and met his new flock. He easily integrated into the large flock of approximately 40 lovebirds and within hours was beginning to make friends. After observing his behavior, we have a sneaky suspicion that “SheWho” might be the appropriate name….but we’ll stick to his formal given name, HeWho. We are honored to care for this lucky and special little jewel!