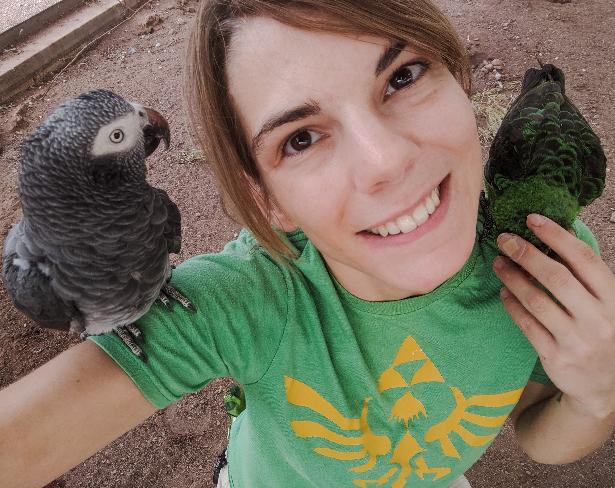 Animals have been an important part of my life for as long as I can remember. From the time I could walk, I was cuddling the many barn cats on my grandma’s farm, despite my severe allergies. My mother, who wanted to support my love for animals, but without worrying about my throat swelling shut, got me a box turtle to care for, instead. Eventually one turtle became many (including a large tortoise), and I shared my bedroom with a sizable reptile collection. Then one Christmas, I was gifted my first parrot– a young Quaker parrot. I can still remember the first time I saw her and she stepped up on my hand. It was love at first sight. As a child, I did not understand the implications of having an intelligent, long lived animal that would still be with me long after I graduated college, started my first real job, and moved around the country. I had no idea the impact this small, green bird would have on my life.

While attending Texas A&M I became involved with the Schubot Exotic Bird Health Center, at the University’s vet school. Because of my prior experience with Quakers, I got a job caring for their flock of 80 or so Quaker Parrots that were used for non-invasive research, such as behavioral or nutritional studies. At that time, they were also involved with a project studying colonies of feral Quakers around DFW. Quakers are a very hardy species of parrot that have successfully established colonies in many cities around the US. Part of their success comes from being the only parrot species that build nests. In urban environments, their preferred location is atop large transformers, and because these nests can get very large (housing dozens of pairs of birds) and are made of dry twigs, they create a significant fire hazard for electrical companies. Unfortunately, at that time, there was no consideration of the Quakers’ breeding season and the nests were torn down whenever they became a safety hazard. Any babies were collected and brought to Schubot, where the entire team, as well as many volunteers, were responsible for the care and hand-feeding of dozens of prickly, quaking, baby birds. It was an unforgettable experience.

My time at Schubot gave me so many unique opportunities, all while working alongside the amazing vets and researchers currently leading the field in Avian Borna Virus research and Scarlet Macaw conservation efforts (Tambopata Macaw Project). When I graduated from A&M with my B.S. in Wildlife and Fisheries Studies, I knew that I wanted to continue bettering the lives of captive wildlife, so I went into the zoo field. My first job, at the Abilene Zoo, allowed me to do just that. In addition to caring for the needs of the zoo’s numerous collection of exotic birds, I also participated in the breeding program for the endangered Attwater’s Prairie Chicken, and the zoo’s avian rehabilitation center for native birds. Since then, I have worked with countless exotic species, including river otters and wolverine at Northwest Trek in Washington State, to toucans and flamingos at the Tracy Aviary in Salt Lake City, Utah, as well as many beloved cats and dogs, during my time as a vet tech. Every animal I’ve had the pleasure to know and work with has a special place in my heart, but I’m glad to be at The Oasis, with my avian soulmates- that is, parrots. At home, I live with the kindest standard poodle, Sidney, a feisty parrotlet, Lucy, a very spoiled (and toe-less) Congo grey parrot, Stella, and of course, my Quaker parrot, Kiwi, who is now nearing 20 years old, and has been with me every step of the way.