Discover The Oasis which was to be held onsite on May 2 has been cancelled. We are considering a gathering later this year, likely in October when the summer heat has subsided. Meanwhile, we are looking into options to provide a virtual event and activities that can be accessed via the internet. Stay tuned to our website and social channels for information coming on that soon.

Onsite visits, tours and the volunteer program will be paused until further notice.

Join us in support of the Birds of The Oasis

Come and hear what’s been happening at the sanctuary including the progress of the Capital Expansion Project!

The day will be packed with a compelling presentation, stunning photography, information and insights of the Rio Grande Valley parrots.  And of course, there will be lots of time to spend with The Oasis birds and a delicious lunch. Registration is open now! We are looking forward to seeing you. 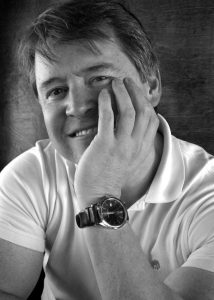 We are pleased to have wildlife artist, writer and conservationist Charles Alexander, present “Flight of the Castaways.”

Charles will share stories from his wild parrot research in the Rio Grande Valley of Deep South Texas. His ongoing study across the Valley’s urban environment, just a few miles from the Mexican border, has revealed a surprising and colorful world of close-knit parrot families, territorial rivalries, hungry predators, and human-imposed challenges. Over the years, Charles has searched for Valley hotspots where the social lives and breeding behavior of native green parakeets and red-crowned parrots are best observed, getting to know and recognize individual parrot personalities. Time and again, the Valley’s wild parrots have demonstrated their compelling strategies for surviving and thriving within the man-made jungle. Following the free-wheeling flocks year after year has proven to be among the artist’s greatest adventures.

Charles Alexander Bio
Born in Orange, Texas, but raised near Memphis, Tennessee, Charles Alexander is a wildlife artist, writer, historian, and naturalist now based in the Rio Grande Valley. His paintings have hung in prestigious museums and exhibitions from coast to coast, from San Francisco’s Ft Mason Center in aid of Congo’s Lola ya Bonobo Sanctuary, to New Jersey’s Hiram Blauvelt Museum, one of the few museums in the US dedicated exclusively to the art of the natural world. His essays, articles, paintings, and photographs have appeared in numerous publications, including Birder’s World, The Bulletin of the World Pheasant Association, Texas Birds Annual, The Journal of the Texas Ornithological Society, and Art into Action, a commemorative book featuring the work of seventy-nine international artists in celebration of the founding of the United Nations World Environment Program.

At the age of twelve, Charles began volunteering at the Memphis Zoo, dreaming of being hired as a zookeeper one day. When he was eighteen, the zoo’s Curator of Mammals presented the budding naturalist with the chance to raise an orphaned lowland gorilla, an opportunity that opened the door to a full-time keeper career. During his Memphis Zoo years, Charles was privileged to work with a multitude of rare species, many of them critically endangered, an experience that emboldened his desire to use his art and writing to raise awareness of the plight of vanishing wildlife around the world.

Charles left the zoo in 1995 to pursue his art full-time. He has since researched his stories and paintings in many wild places, including the Mara-Serengeti ecosystem and flamingo lakes of Kenya and Tanzania; the Virunga volcanoes of Rwanda, home of the mountain gorilla; the badlands and prairies of the American Great Plains; the Amazonian rainforests of Ecuador (where he first pursued wild parrots); and the bottomland swamp forests of the Lower Mississippi floodplain.

The artist’s interest in the extinction of the ivory-billed woodpecker inspired a decade-long quest to record oral histories throughout the Lower Mississippi region, from his home in Memphis down to Madison Parish, Louisiana, where the last-known ivory-bill was documented in 1944. In all, his archive encompasses 360 interviews, each a window into the human and environmental history of the delta lands from the late 1920s to the war years of the 40s.

In 2020, Charles will journey to Tasmania to research the story of Benjamin, the last-known thylacine on Earth, a lone male who died in Hobart’s Beaumaris Zoo on September 7, 1936. Confined to Tasmania in historic times, the thylacine, also known as the Tasmanian tiger, was Australia’s largest marsupial carnivore. Neither tiger nor wolf, but a unique native creature that raised its young in a pouch, the thylacine could not withstand man’s relentless persecution. While in Tasmania, Charles hopes to record oral histories that will shed light on the waning days of the species in the early decades of the 20th century.

In October 2009, the artist first arrived in the Rio Grande Valley to paint Taz, the last Jentink’s duiker antelope living in any zoo in the world, at the Gladys Porter Zoo in Brownsville. One of Africa’s most mysterious mammals, the Jentink’s duiker was bred for the first time in captivity at Gladys Porter in the early 1970s. Charles’ painting of Taz, researched from life, was successfully auctioned to help fund the zoo’s youth education program in 2010. Several fundraisers and auctioned canvases later, Charles decided to become a permanent South Texas resident. Since 2012, he has documented the lives of the Valley’s wild red-crowned parrots and green parakeets on a daily basis, recording detailed observations across the urban jungle. Year after year, the Valley’s parrots have reaffirmed the basic truth that parrots are family, that wild parrots should fly free.

Inspired by my fascination with the lost Carolina parakeet of my native American South, I have followed the wild green parakeet and red-crowned parrot flocks here in the Lower Rio Grande Valley of Deep South Texas since March 2012. Though I began with an intensive study of green parakeets, the Valley’s charismatic red-crowned parrots soon proved impossible to ignore. Since June 2018, I’ve had the rare chance to observe the complete nesting of both green parakeets and endangered red-crowned parrots side-by-side at a local bank and shopping plaza here in Brownsville, just a few wingbeats from the Mexican city of Matamoros. The birds have chosen cavities in the bank building’s facade of styrofoam columns, the green parakeets nesting within just a few feet of active amazon nests. The plaza is among the best Valley locations to allow a detailed glimpse into the lives of our native wild parrots on an everyday basis. I learn something new every day, sometimes every hour that I spend with the birds. Because they live with no guarantees of tomorrow, the Valley’s wild parrots are a constant reminder to me personally that life is often short and is meant to be lived to the full, that every finite day must be embraced joyously, in the company of those we love.

The Oasis Sanctuary is located 25 miles north of Benson, Arizona (in the area of Cascabel).

Tucson International Airport is most convenient – about a 90 minute drive to the sanctuary.

Phoenix Sky Harbor International Airport is approximately 200 miles north – about a 3.25 hour drive to the sanctuary.

If arriving by air a rental car is necessary. There is approximately 5 miles of dirt road to reach the Sanctuary from the south, so it is important to have appropriate transportation.

Motel Accommodations In Benson include:

If you will be staying in Benson, won’t you join us for dinner after the event, dutch treat? Location to be provided on event day.